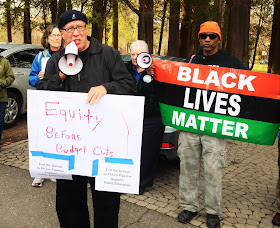 I hear some educational activists want to be the deciders?
Who is authentic?
Who is a sell out?
Who is weak?
Who is pure?
Who is a real activist?

Who decides?
I know something about activists.
I have been an activist since I was eight years old.
My first march was August 28, 1963.
I was the tag along company for my grandfather who decided he needed to be part of the March on Washington for Jobs and Freedom.
At eight years old I had no idea I was an activist, but activist I became.
The only thing about the March on Washington I really knew was,
No one from the union hall would go with him.
No one from our church would go with him.
No one from his VFW would go with him.
I knew my grandmother was afraid to go.
My mother was afraid to go.
I knew they both loved Dr. King.
But, they read the newspapers,
They watched the news, and everywhere Black people marched back in 60’s they were met with hatred and brutality.
My mother loved justice, but she was afraid.
For weeks my grandfather asked friends and everyone he knew to go to DC,
He said I’ll drive,
I’ll pay for the gas,
I’ll buy lunch,
But no one would go.
My grandmother and mother prayed no one would go.
Why, because they loved him, and were afraid something would happen, and he would be hurt.
Finally he stopped asking people.
My grandmother hoped he would decide not to go.
He was going?
He fought in World War I, lived through the great depression, believed every American deserved a good job, and everyone had the right to vote.
My grandmother and mother prayed he would change his mind.
God did not answer their prayers.
They were afraid for their stubborn old man with a love for justice.
God did answer his marching prayers.
On the day before the march he washed his car, changed the oil, checked the tires, and filled up the gas tank. Laid out his best Sunday suit. Asked my grandmother if she could pack some sandwiches and his thermos. He said please in his best please voice.
There was an argument, my grandmother tried to get him to change his mind. He would not.
She called my mother crying.  My mother went over. She took me with her.
They came to accept he was going to the March on Washington for Jobs and Freedom.
They were afraid, but proud of their stubborn old man.
They made sandwiches, brought an extra thermos one for the drive down, and one for the drive back. In 1963 he was 68. They calculated the drive time down would take 4 to 5 hours and another 4 to 5 hours on the way back, and figured the march would last at least 6-8 hours.
He would need to leave at 4:30 AM. They figured he would get there around 9:00, stay until 4 or 5, and drive home. They determined he needed coffee for ride down and back. None of this change the fact that they were afraid for him. People today have no idea how brave those 250,000 marchers were in 63.
My mother had brought a bag with pajamas and my only suit to my grandmother’s house. She had decided if the old man is going to Washington he needs company for the ride. She told my grandmother it’s a long ride, he’ll be lonely, and he could get tired. He needs someone to keep him awake.
Little Jess is the perfect person for that. He can’t stop talking. Plus if we send him with the boy he’ll be extra careful not to get into any trouble. If trouble starts he'll take the boy and run.
So I began marching in 63 at the age of 8.
No one asked my grandfather are you for freedom?
No one asked are you for jobs?
No one asked my grandfather why is a White man marching with Black people?
Why did you bring a little boy?

Who decides?
I marched in Washington, Arizona, Connecticut, New York, New Jersey, Pennsylvania, Delaware, Maryland,  and Selma Alabama.
I stopped counting how many times I have marched for jobs, peace, health care, justice, and for the past year I have added marching for Black Lives Matter and Moral Mondays.
When you march no one ever checks your commitment.
All that matters at any march is your willingness to march.
All marchers are always welcomed.

Who decides history?
In 2011 after 8 years of No Child Left Behind a group of activists formed SOS. We decided to hold a rally, a conference, and a march in Washington DC against high-stakes testing and NCLB.
Everyone thought we didn’t have a hope and a pray to pull it off.
We didn’t care. We just knew we could not be silent any longer.
We did not have a dime.
We did not have one big name to speak.
Rita Solnet from Parents Across American suggested I drive to New Haven Connecticut to where Diane Ravitch was speaking. Rita said ask Dr, Ravitch if she’ll come to our rally and march.
Would she be willing to speak to the marchers?
So I drove to New Haven to hear Diane Ravitch, and to ask her.
I stopped her as she was leaving, and asked her if she would be one of our speakers. She said, you’re Jesse Turner the walking guy. She said let me think about it. She would need to check her schedule for July.  She said I’ will have to get back to you. She took my phone number.
I walked back to my car with my wife, and asked what do you think? She said I don’t know. Before I opened the car door my cell phone rang.  I am going to DC Walking Man. She went on her own dime, and contributed 10,000 dollars to the march. She has blogged and fought back against Ed Reformers, and came again in 2016.

Who decides who is an authentic activist?
Not me, I count who shows up.
A few names of who showed up in 2011.
Names like
Diane Ravitch,
Jonathon Kozol,
Nancy Carlsoson-Paige,
Anthony Cody,
Ken Bernstien,
Nancy Flanagan,
Rita Slonet,
Bess Altwerger,
Rick Meyer,
Ruth Rodriquez,
Ceresta Smith,
Bob George,
Morna McDemott,
Tim Slekar
Mark Naison,
Jose Vilson,
Mike Knonsky,
Deborah Meier,
Matt Damon,
Forgive me, I am sure I am missing some important names,
And of course 8000 marchers showed,

We don’t decide.
We don’t want deciders.
We want marchers.
We don’t need purists.
We want a coalition of the willing.

We don’t check credentials.
We don’t test you.
We say glad you are here today.
We don’t want name callers.
We don’t want distractors.
We want allies, marchers, and people willing to stand together for our children, our teachers, and our public schools

If you want to judge activists then you can’t build unity.
If you want to be the decider look in the mirror.
I want marchers not deciders?
If the mission of you deciders is to break up our Save Our Schools March for Public Education and Social Justice coalition?
YOU FAILED.
Jesse The Walking Man Turner


If you want to listen to the song I listened to on my walk this morning its...Pete Seeger's version of "Which Side Are You On" > https://www.youtube.com/watch?v=9XEnTxlBuGo <