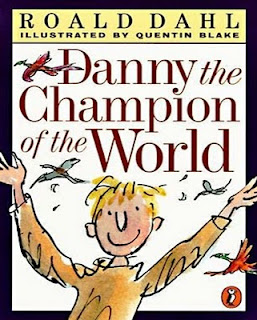 At 2:30 AM she knocks on my bedroom door. Daddy, do you want to come and watch the eclipse with me? Does she really even have to ask? So I drag myself out of bed, and go down the stairs out into that freezing 24 degrees temperature. It's so very chilly and cold. My cup of coffee doesn't help warm me up. She is beautiful, she is 21 years old, and she stills wants her Dad to watch the first lunar eclipse on the winter solstice in nearly 500 years. This warms me up completely. The fact it is still cool to do things with her father alone makes this holiday season wonderful, but then the following morning I see the book she was reading waiting to wake me for the eclipse on the kitchen counter.
There it is, Roald Dahl’s Danny The Champion of the World the copy of the one I read to her when she was 7 years-old one Christmas in Ireland. These are the moments I live for in life. This book moment simply makes this my Christmas perfect.
The note 14 years ago said: Read to and with your child for some 30 minutes a night. This was the request from Mrs. Crowley her second grade teacher…Her note to parents simply said: read to and with your child for 30 minutes every night. It was hand written something unheard of in these days of the printer rules. Do this to encourage a love of reading, be a ham, play it up, and enjoy every moment.
How I the guy whose father never read anything to him, the guy whose father abandoned his only son at the tender age of 10. How I loved my 30 minutes each night with my only daughter. Some 14-years later I love watching the lunar eclipse in wee am hours out in that icy cold night. These are the gifts father’s pray for.
So parents, grandparents, guardians read to your children, read to them not to bring up their test scores, not even to make them better readers, but to plant a love of reading.
Lets pass on Mrs. Crowley’s message written from a time when children were more than test scores… Before the race to the top, and before NCLB. Do it to encourage a love of reading, be a ham, play it up, and enjoy every moment..
Thank you Mrs. Crowley second grade teacher from the valley of the mountain in the land of the sun in Tucson Arizona for these priceless gifts. Come to think of it didn’t we also watch a total eclipse of the sun with you as well.
Thank you, thank you, thank you Mrs. Crowley,
Jesse
Posted by Jesse Turner at 11:06 AM No comments:

Come on up for the rising 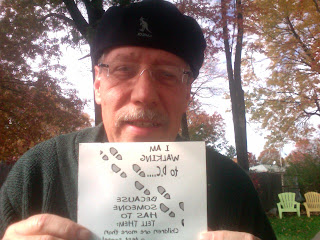 My mother understood what it meant to tremble, she understood struggle, she knew that if she were really there her heart would be broken, darkness would have filled her soul at that moment, but above all else she knew she would have been outside that tomb on her knees praying with Mary and those other women…remaining silent, staying home, feeling hopeless were not options in her vocabulary. Silence and apathy were not acceptable in the Margaret Turner's home.

Now that verse held it all for momma, to be there at that moment, that verse said it all, that verse was my mother’s saving grace. That verse to this day leaves me trembling.
We too in America are at a tomb, and instead of a body being laid to rest what we have is a group of leaders who want to bury our public schools. Those very places that for nearly 150 years have left us with a sense of purpose and hope.
My point is not a religious one, but one about silence and apathy. Fifty years from now when someone ask “were you there” as NCLB/RTTT tried to bury public education, tried to shift the focus from educating citizens to producing good test takers… When our schools became trading commodities on Wall Street, and our children pawns for profits.
What will you say?
At the age of 55, I doubt I’ll be there, however my students will say,
Jesse prayed to save our schools,
Jesse spoke up to save our schools,
Jesse wrote to save our schools,
Jesse carried signs to save our schools,
Jesse walked to save our schools,
Jesse had faith in our public schools.
He refused to accept that NCLB/RTTT tomb.
He fought for the rising.
Silence and apathy were not in his vocabulary.
Come on friends take the next step join our Save Our Schools March?
As Bruce Springsteen sings come on up for the rising.
Come on up for the rising this July 28-31 in DC, and from every nook and corner in America.
http://www.youtube.com/watch?v=eNnB4dkVRJI
Jesse
Posted by Jesse Turner at 2:02 PM 1 comment: