Dear Next President, I am reporting a crime against children 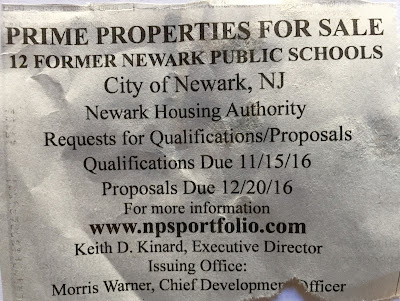 Dear Next President: It appears the mainstream media failed to raise one single significant question about equity in our nation's public school system during the debates. It is my intention to update you on the status of our public school system from an educator's perspective.

Our Nation's greatest achievement ~ Over one hundred and fifty years of Public Education! Our Nation's greatest shame, 150 years of quality Public Education determined by zip code policies... Historically, our Public School System has, since the first day doors opened, given more money to our wealthy schools than to our poor schools. America's Black children have not only had to face inequity but segregation and racism as well.

Dear Next President, racism has deep roots in our American Public School System, since that very first day when doors opened. Immigrant children have done no better than Black children in our public schools. States have often threatened to block funding for public education to undocumented children. In 1982 only a narrow 5-4 United States Supreme Court vote in Plyer v. Doe upheld the right to a public education to undocumented children. The fight continued in California (1994), Illinois (2006), and Alabama (2011), and others will follow.

Poor children have been short changed since the very first day public education became a reality. Our constitution makes no mention of public education; it was individual states that made a commitment to public education as a public good. The "Public Good" was not about equity and justice for all in our nation's public schools. Here in Connecticut we had a Commissioner of Education who, when pressed by Hartford parents on "how we can improve the education of our children, his answer was simple and direct "change your zip code". While our United States Constitution fails to mention the right to a public education. Our United States Declaration of Independence (1776) states; "We hold these truths to be self-evident, that all men are created equal, that they are endowed by their Creator with certain unalienable Rights, that among these are Life, Liberty and the pursuit of Happiness." I would argue that the educational aspirations of a free people should not be rooted in some "Common Core" or in the High-Stake Test scores of our nation's children, but in these simple words Life, Liberty, and Pursuit of Happiness. The Dept. of Education today, blames students, parents, teachers and local public schools for the failure of a nation to provide all children with an equal and just public education system. This is our nation; a nation that is failing its children.

One of your upcoming roles will be to select the next United States Secretary of Education. For over 14 years, we have endured a) No Child Left Behind, b) Race To The Top, and c) Every Student Succeeds Act. All three of these "education reform policies" are failures, failures that have left Black, Brown and Poor communities with a legacy of public school closings, and choices without equity. These acts were sanctioned by all three former and current Secretaries of Education. Someday history will mark their tenures as reigns of testing terror. My hope today, is that you do not look to these former acts as role models for public education, but rather you see them for what they are, failures ~ they fail to serve public education. Remember "Life, Liberty, and the Pursuit of happiness. Consider those sacred words written into our nation's Declaration of Independence as our public school system's justice and humanity test. Before you implement new education reform polices ask if they can pass the humanity and justice for all of America's children standard?

Maybe you will take into consideration, Horace Mann (often called the father of America's public schools), and first Massachusetts Secretary of Education who documented well, our efforts at equity. After six years in his role, having visited some 1000 schools, he writes "Inequality of education opportunity is everywhere". He comments that Massachusetts takes better care of its livestock than its children. No Secretary of Education in any state in America, or at the national Department of Education level, has ever come close to the actual on the ground visits to our nation's public schools as Secretary Mann did. Today these same secretaries of education appear more comfortable sipping champagne with billionaires, tech industry giants, hedge fund managers, or shooting a round of golf with CEOs looking to sell their products to our nation's schools. Our newest President of America would be wise to advise the new Secretary of Education to immerse themselves in America's Black, Brown and Poor public schools. Inform him/her that you expect them to follow the Horace Mann tradition of visiting a public school every day, lecture nightly in the town hall on the tenets of public education, and dine with the locals. Our next Secretary of Education should visit, listen, and serve our nation's children not our nation's CEOs.

Coretta Scott King said: " “I must remind you that starving a child is violence. Neglecting school children is violence. Punishing a mother and her family is violence. Discrimination against a working man is violence. Ghetto housing is violence. Ignoring medical need is violence. Contempt for poverty is violence.”
NCLB, RTTT and ESSA are acts of violence against our nation's children, their parents, and their teachers. More than one hundred and fifty years of inequity and injustice is not an oversight, this is not an error in judgement, or some misstep.  This is an intentional crime. A crime against the humanity of our nation's most vulnerable children. America cannot tell Black, Brown and Poor children that equity is coming, that justice is out there, somewhere, someday.

In protest to these failed education policies I walked from Connecticut to Washington DC in 2010 protesting NCLB and RTTT. I walked again in 2015, this time to protest the passing of ESSA. I have marched on DC again in 2016 at the Save Our Schools Coalition March for Public Education and Social Justice. The education reform policies of the past 14 years have demoralized our nation's teachers, harmed our children, and have left a wreckage of closed public schools in its trail. Promises of choices without equity are crimes against humanity.

This Sunday while reading The New York Times, I found the above notice "Prime Properties For Sale" 12 former Newark Public Schools For Sale. The sad and disgusting legacy of No Child Left Behind, Race To The Top, and Every Student Succeeds Act is an astonishing 14-year legacy of abandoning the public schools that serve Black, Brown and Poor children time and time again. The closing of poor local schools in Black and Brown communities has become as common as the seasons in cities across America. Every Black and Brown community school closing is a crime.

Dear Next President, others may be willing to give you a grace period. But, after over a century and a half of inhumanity, inequity and injustice in our public school system, I can give no grace period. I will not tell Black, Brown and Poor children to wait on their aspirations of Life, Liberty, and the Pursuit of Happiness. My intention in writing you is to report a crime against our nation's most needy children. Any someday promise of equity and justice is coming, justifies the criminal actions of a nation against its own children.
Silence and Apathy are Not Acceptable,
Jesse The Walking Man Turner 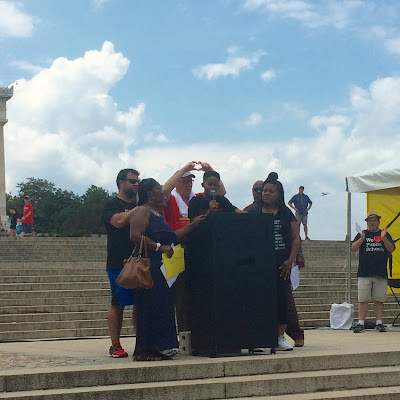 If you like to listen to the song I listened to on my walk over the mountain this morning its Leela James version of Sam Cook's " A change is gonna come"
https://www.youtube.com/watch?v=0dtwpdgIUiQ

Posted by Jesse Turner at 9:10 PM No comments:

People Get Ready.. there's a trian a coming 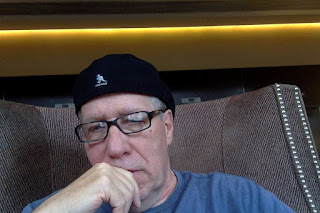 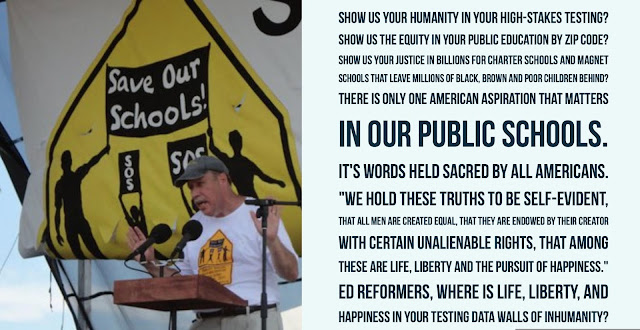 It you like to know what this walking man is listening to on his walk over the mountain today its "People Get Ready" version by Curtis Mayfield, Taylor Dayne and David Lindley > https://www.youtube.com/watch?v=bj7W37ZG-nY<
Sing it all the way to the public schools our children deserve.
" People get readyThere's a train a-comingYou don't need no baggageYou just get on boardAll you need is faithTo hear the diesels hummingDon't need no ticket 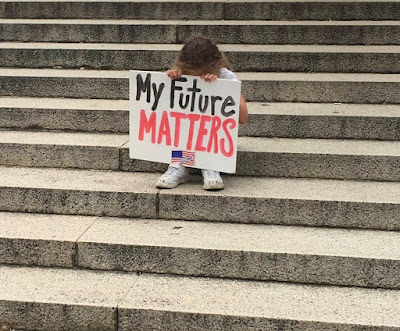 Nell Nodding’s said: "We will not find the solution to problems of violence, alienation, ignorance, and unhappiness in increasing our security, imposing more tests, punishing schools for their failure to produce 100 percent proficiency, or demanding that teachers be knowledgeable in the subjects they teach. Instead, we must allow teachers and students to interact as whole persons, and we must develop policies that treat the school as a whole community." (P.10) 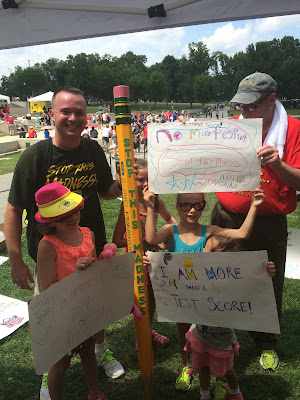 If you like to hear Bruce sing what I am feeling on my walk over the Avon Mountain this morning..its  Rocky Ground > https://www.youtube.com/watch?v=qPmIIXXv0d8 <

Posted by Jesse Turner at 9:53 AM No comments: 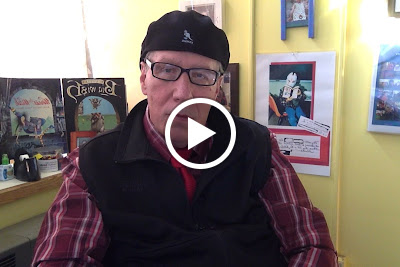 Hold on Bridgeport Parent Moral Monday CT and Save Our Schools CT is planning a trip in November
Posted by Jesse Turner at 1:23 AM No comments:

Wake up, Policy Makers, Legislators and Ed Reformers you have failed 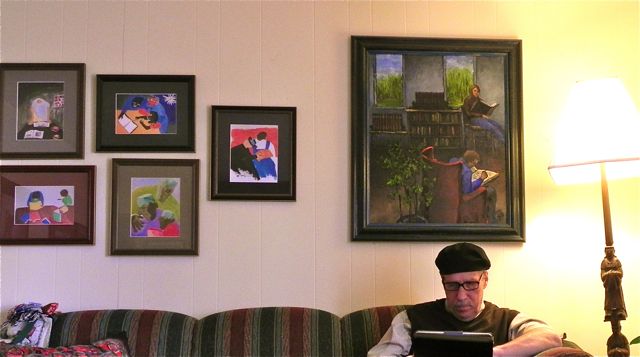