I use to write research articles. For over a decade I was an associate editor for the New England Reading Association Journal.
I was a good academic, but I discovered that the research did not matter to market-based education reformers, policymakers, and legislators looking to blame teachers, children, and poor community schools. The very people who would use the illusion of school choice and high-stakes testing to cover the vast inequity and injustice that Black, Brown, and Special Education children face every day in our public school system. These people betrayed them, and these people don't care about the research.
Even our courts have protected that inequity, time and time again. Despite, Brown v The Board of Education becoming the law of the land in 1954. In this School To Prison Pipeline, market-based reformers don't care about the research, the data, or the truth. And to be honest no one really reads academic articles these days. Profits and lies rule education reform.
I never wanted to be a blogger. All I wanted was to teach and be a good academic. But NCLB, RTTT and ESSA Act(s) got in the way. Silence and apathy, trusting the status quo are unacceptable in the face of systemic racism and lies.
So in 2010, I started walking. I stopped writing articles and became a blogger. Here is the story of my blog Children Are More Than Test Scores.
To date there have been over 200,000 views, my articles altogether would be lucky to have 500 reads. Although my university was quite impressed with those 500 reads, it gave me tenure, promoted twice. To be honest they also were impressed with my activism and blogs as well. I never hid any of it. Trust me new academic like Julian Vasquez Heilig promotes the new academia needs to be rooted in social media as well. Young ones don't believe the hype you can do both, keep your self-respect, and rise.
My blog writing is mixed in with my activism and love of public schools. If someone would have said when I became an academic that I would become an activist and blogger...well I would have thought them crazy.
Sometimes Crazy is what you need,
Dr. Jesse P. Turner
Professor of Literacy, Elementary, and Early Childhood Education.
Here is the link to my 7 minutes BrainWave Anthology interview with Producer Robert Greenberg
https://www.youtube.com/watch?v=NvqnxBivtvo&t=11s
Posted by Jesse Turner at 9:09 PM 2 comments:

Three Hero Teachers who turned a homeless kid into Ph.D. 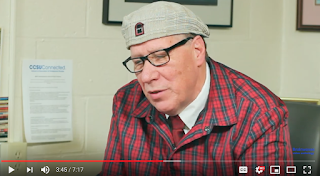 I am going to post three separate video Blog entries over the next three days. The video interviews are done by "The Brainwaves video anthology" they are produced and filmed by Bob Greenberg. He is this incredible human being, former teacher, and producer. He describes his anthology as  "Here you will meet the thinkers, dreamers, and innovators; some of the brightest minds in education. This series is meant to inspire and engage the viewer to dig deeper and learn more. In the words of Georges Melies, (The Invention of Hugo Cabret) "Now sit back, open your eyes and be prepared to dream."

The first one is "Teachers Make a difference"


Sometimes God sends you angels. You don't really know where they come from. I get an email, then a phone call from Robert Greenberg, he says do you know about the Brainwaves Video Anthology? I have no clue, but as we are talking I go online see interviews with Ken Burns, Noam Chomsky, Diane Ravitch, Nancy Carlson-Paige, Mark Naison, and dozens, no hundreds of voices that have inspired me, informed my thinking and lifted me up.
He said can I come to interview you? Now, I did wonder why me, but I know God sends these Angels. So I said yes...
I asked what do you want me to talk about? He said your activism, your teaching, and one teacher who inspired you...
Now, Robert, I know some people have one, they are blessed, people who have two are lucky, but sir I have three, and those three make me the most blessed teacher walking this earth.
Here is Robert's video of Jesse The Walking Man Turner talking about his three hero teachers.
Please follow the link? I promise you won't be sorry, especially if you are an educator.
https://www.youtube.com/watch?v=uz9G-QyMWks

Posted by Jesse Turner at 12:24 AM No comments: