The people are stepping up! 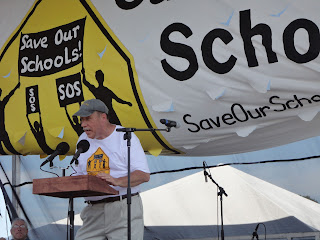 Once again it appears the pundits of mass media are confused. They say claim our Occupy Wall Street people, and all the other occupiers popping up across America, and in cities all over the world lack a central message a single focus.

Well let me put on my teaching hat for you politicians and media pundits. First you must stop listening to your own sound bites. Listening to your self talking is not listening to others. The answer is standing right before you.
The people are speaking, and you are still missing the point. Listening is a skill that involves more than waiting for the answers you like, or the ones that fit neatly into your perfect sound bites. Life is complicated, but here it is from one Liz Hourican, one of the protestors in Phonnix:
"Peace activists, indigenous rights activists, immigrant activists - they're all here. It may sound different to you but it's all the same. We're all stepping up and saying something's wrong."
Print this headline the people are stepping up and saying something is wrong, and we are taking back our country!
Here is my proposal friends: The Opt Out Of The State Test: The National Movement > http://unitedoptout.com/< is planning to occupy the United States Department of Education this coming March 30, 31, April 1 and 2. I say lets join them. Lets occupy every DOE in all 50 states?
I am asking all the members of Children Are More Than Test Scores > https://www.facebook.com/group.php?gid=352118040858< to occupy the DOEs in the state they live in on those dates as well. I am proposing to the Save Our Schools March & National Call To Action > http://www.saveourschoolsmarch.org/< leadership that we join this occupy effort.
The time for stepping up, standing up, walking, marching, and speaking up is now!
I am going to organize a coalition of the willing in Connecticut to occupy the DOE this spring, and I am going to put my heart and soul into making this happen, and I am going to join the Opt Out group in DC on April 1 and 2 in solidarity as they occupy the United States Department of Education. I salute those at Occupy Wall Street.
Still walking to DC,
Jesse

Posted by Jesse Turner at 8:49 AM No comments: