For George and all those union carrying first responders who ran into those towers on 9/11. 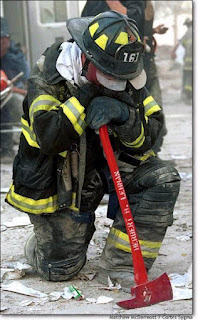 high achieving students. It mades me wonder about our nation's failure to give students something more than a test scores to look up to.
Their is a real legacy left to us by our nation’s First Responders not rooted in cheating, but in the courage to do the right thing. This is what schools should be teaching not how to do better on some meaningless test. Article link: http://www.nytimes.com/2012/09/08/education/studies-show-more-students-cheat-even-high-achievers.html?_r=1&emc=tnt&tntemail1=y


The real legacy of Secretary of Education Arne Duncan's Race To The Top is not equity, or a closing of the achievement gap, but simply a culture of cheating. Neither NCLB, or this race of Duncan's has any moral foundation to it. His foundation is simply better test scores make better people.
Let me say I disagree Mr. Secretary.


This coming Monday we shall remember those who lost their lives on 9/11/01.
Let's not forget that many of the ones running from those burning towers were most likely individuals with high test scores. The ones running out were the stock brokers, corporate lawyers, CEO's, and most likely not members of any of our nation's unions.
So brothers and sisters who ran in to save them?
Which ones dared to rushed in even after the first tower fell?
Which ones were walking people down the stairs as the world came tumbling down around them?
Let me tell who they were,
They were police officers,
The emergency medical technicians,
And fire fighters.
The ones with union cards!
You know the ones whose test scores never won acceptance in to our Harvard(s) and Yale(s).
The ones like my old team mate Fire Captain George Bueno whose lost one of his crew.
Captain Bueno who had to fight for his pension for years after 9/11.


I say test scores have nothing to do with making us better people, but hearts of courage do.
Imagine if our nation's public schools immersed our young people in a culture of courage rather than a race to the top.
America’s 21-st century is at a cross road in public education. One road calls us to follow ed reformers who consider children data and human capital. They offer a legacy of numbers.
The other road calls parents and teachers to leave something greater.
We are being asked which legacy to we want our public schools to pass on to our nation's young. I want an American legacy rooted in courage not testing and cheating. I want a legacy of something greater than testing. I want future generations to know the courage of the ones who run in while others run out.
Two from the heart brother George,