John Merrow get off the Education Reform Status Quo fence 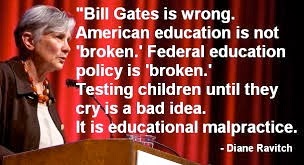 Well, Mr. Merrow, you missed the boat, the mark, and shot yourself in the foot with your blog about Diane Ravitch not being worthy of hero status.
You appear perplexed about teachers calling Diane Ravitch a hero. Perhaps you should be asking teachers. Why they are feeling under assault by many of the Ed Reformers you so often, have let off easy over the years?
She has stepped up to the plate for millions of teachers who feel our profession, our unions, and our professionalism is under attack. She is doing this during a time, when you and so many others seem to be playing it safe by sitting on that status quo fence of Education Reform. Staying on the fence never makes anyone a hero. I understand you never called yourself a hero. I just want you to know those people sitting on status quo fences can never be heroes.
One condition for being a hero is you need to get off the fence, and risk failure, and earned the love of the people by standing up for something worth fighting for. America's public school system is worth fighting for John.
Dr. Ravitch, unlike most education reform pundits calls it like it is, takes on the education reform billionaire's club, and a status quo United States Department of Education that has spent 1.2 trillion dollars over a decade on policies that have failed to demonstrate real effects.
My five simple rules for being a hero for me are:
1. You stand for something that goes against the grain,
2. You fight for a truth that is not popular with the powerful and the mighty,
3. You give voice to the marginalized,
4. You change people minds, including your own, and
5. Finally you are loved by millions.
Dr. Diane Ravitch's last two books, her endless quest to honor teachers and defend our public education system in every speech since 2010 changed my mind on her. You see John Merrow in 2010 I walked 400 miles from Connecticut to Washington DC to protest this testing reign of terror. The following year I would walk it again, and helped Save Our School March plan a DC conference, a rally, and a march to protest high stakes assessment. We had no major speaker for our conference. Then Diane Ravitch was speaking at Yale, and I ask her afterwards would you be a speaker for us. We could not pay for her to speak, or even pay for her travel and housing as well. All we could offer was a pat on the back, Her answer Mr. Merrow was YES.  You see Mr. Merrow, before she said YES she was just another respected education historian who failed to meet that final bar. You know rule number 5, to be loved by millions. That yes, and her passionate defense of our public education system in her last two books, and a thousand speeches honoring and defending our public schools and teachers met rule number 5.
Counting myself as one of those that love her,
Jesse The Walking Man Turner 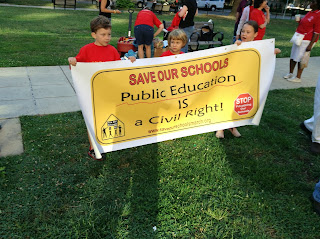 For those interested in what song the Walking Man listened today on his walk, it was Mariah Carey's Hero http://www.youtube.com/watch?v=0IA3ZvCkRkQ
Posted by Jesse Turner at 1:20 AM