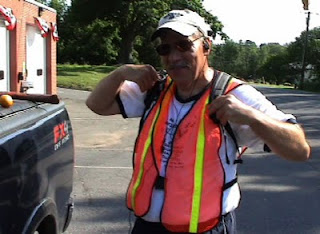 As Henry David Thoreau, American author, poet, naturalist, tax resister, surveyor, historian, and philosopher said, quote “If a man does not keep pace with his companions, perhaps it is because he hears a different drummer. Let him step to the music which he hears, however measured or far away”.

From my perspective I can hear Henry say “walk on Jesse, don’t be afraid to walk to the beat of your own drum”. Thus it was, this past Friday June 4, 2010 at 6:30 am as my walk to D. C. officially began. There were no brass bands, no chorus singers, or cheers leaders this morning. If it weren’t for my good friend John Foshay and our very own Facebook group “Children Are More Than Test Scores” these first steps would have surely gone unnoticed. Never the less the lord gifted me with a stunning sun filled morning, full of sweet cool breezes to guide my walking journey on day one.

Armed with Georgia Hedrick’s walking stick, my iPod full of good music, and a heart full of hope I walked my first 11.1 miles through New Britain, Kensington, Berlin, all the way to Meriden Connecticut.

Martin Luther King Drive. As I passed the small figurehead of Dr. King, I repeated some of the words of his “I have a dream speech” and I somehow felt connected to our nation’s struggle for civil rights. I don’t need a genie to tell me Dr. King understood that America’s public schools are more about morality, Justus, and hope than numbers on standardized bubble sheets. I know he too would be next to Henry David Thoreau saying “Walk Jesse walk”.  I felt empowered by their lives.

Soon I found myself on Chestnut Street outside the old South Congregational - First Baptist Church, where two years ago I attended the funeral of Dr. Justus Beach who had just passed at the ripe old age of 87.  He was an outstanding grandfather, father, professor, and friend of mine at Central Connecticut State University. As I passed the church, I offered a prayer of thanks for having had the honor of working with Justus on our Reading and Language Arts Advisory Board. What kind of person was he? Well in 2000 a retired Professor Beach had graciously provided scholarship funding for students from economically and educationally disadvantaged backgrounds enrolled in the University's Teacher Preparation Programs. CCSU Students to this day still benefit from his gift. There is no doubt in my mind that Justus too, would understand my walk, and would cheer me onward. Rest in peace, my old friend, rest in peace.

I continued with whispered prayers as I walked up around Arch Street reflecting on the challenge ahead. In my humble opinion our politicians, policy makers, and educational leaders appear determined to undermine our very system of public education in America. Their policy pits magnet schools, charter schools, and local schools against each other. Shouldn’t all public schools be on the same team? When was the last time you heard Secretary Arne Duncan say something positive about a local school?
They just don’t seem to understand you can’t win our minds until you win our hearts. We don’t need a race we need unifying. No one is going to win our hearts with calls for more testing Mr. Secretary. From the very beginning I have been opposed to the No Child Left Behind legislation, and have been fighting it all along. NCLB allocated one trillion dollars to close the achievement gap. We could have hired an army of tutors to actually help child who struggle with math and literacy, but instead we skipped the tutors, and went with testing, new standards, and new curriculums. What is the return on these educational reforms? Well according to Washington’s own data we have little or no effect on closing the achievement gap. Surely eight years of little or no effect means a change in policy.
I had such high hopes for change with the election of President Barack Obama, but sadly have found that Race To The Top is a continuation of the same old failed policy. Fighting this insane educational reform policy is like hitting your head against a brick wall. No one in Washington appears to care what parents, teachers, and children think about the impact of all this testing has on children.  It was actually a prayer that started me thinking about this walk last November.  I was thinking about how Moses fled across the Red Sea to Midian where he tended the flocks of Jethro, and how he walked all the way back to Egypt. The whole world remembers the story of Moses saying to mighty Pharaoh “Let my people go”.  It was walking and faith that took the Hebrews to the Promise Land. I find strength in prayer, I find courage in my faith, and I find hope in walking.

As I walked through parts of Kensington and Berlin, on Connecticut Route 71A and onto Chamberlain Highway I was listening to some good music, a little country, some Bob Marley, and 11.1 miles later I arrived at West Main Street in Meriden, just as Merle Haggard finished singing one of my favorite spirituals “He walks with me”.
It had taken me roughly three hours, and there he was, John with a cold bottle of water, and a big smile. Whew… 11.1 miles down, and nearly 400 to go, but who is counting I am walking to DC on the old colonial road.

At lunch I met with Mrs. Donna Morin.  Donna is a special education and reading teacher at Pulaski Middle School in New Britain. We have known each other for over 10 years, but have not seen each other for the past three. Like all old friends we caught up on family and friends rather quickly. Next Donna shared her past year’s experience as the President of American Legion Department of Connecticut Women’s Auxiliary.  Then I shared my crazy idea about walking to Washington DC to protest NCLB/RTTT. She talked about the impact NCLB/RTTT has had on the children she teaches. Donna was a panelist on our 2003 Children Are More Than a Test Score Conference, at CCSU. Like I said before I have been fighting this misguided policy for a number of years. In 2003 Donna elegantly explained to the audience how the growth of learning is overlooked by standardized tests.  She told me how after 36 years of teaching, she was for the first time feeling lost. We talked about one of my favorite students “Tyler’ who also happens to be one of her students this year.  Tyler is one of the most amazing adolescents who just happens to have Asperger’s syndrome. He lights up any classroom and brings a smile everywhere he goes. Tyler is a gift not a test score.
Donna mentioned how Tyler had told her that I would be walking this Sunday with his team at UCONN’s Rentschler Field for Autism Speaks.  We did what many teachers do when discussing the insanity of NCLB we shared coffee, needed hugs, resistance stories, and left each other feeling a little helpless.

So what exactly does all my walking and meeting with parents and teachers accomplish Jesse?  When I returned to my office to check my mail there was one from Donna, I’ve already told her I would use it here… here goes,
“Dear Jesse,
I can't begin to tell you how wonderful it was to see you today!  You are a tribute to teachers, parents and students everywhere.
Thank you for restoring the hope that I need to have to see our profession once again meeting the needs of students.   I have become very disillusioned in the past few years while watching what education has become: nationally, district-wise and in our own school building, as well.  I began to question my role as a teacher and wondered if I had "overstayed my welcome" in my career.
I love teaching, as you know, it is more than just my career, it has become whole once again, I am re-energized to go forward and not give up, thanks to the discussion that we had today.  Thank you for that, Dear Friend.  Even Walt noticed a difference when I came home.  He said, "You must have had a good day today!!"  I told him it was one of the best days of the year!!
I anxiously look forward to your next visit next.
Fondly,
Donna”
The funny thing is, I felt the very same after our talk. I am energized, and ready to walk to DC. What does walking and talking accomplish? It energizes us, and offers us hope. While I am no Moses, no Dr. King, no Henry David Thoreau, no Justus Beach, I am Jesse, I can be one man doing something to try to change the world.
I began with Henry David Thoreau, and it is only fitting I end with his words “If you have built castles in the air, your work need not be lost; that is where they should be. Now put the foundations under them."
I am walking to DC,
Jesse
PS Readers if you are really restless you can also view a three minute movie of my day one walk on Facebook's Children are more than test scores group page. As Tiny Tim said "God bless everyone"
Posted by Jesse Turner at 12:26 AM