What is lost under No Child Left Behind? 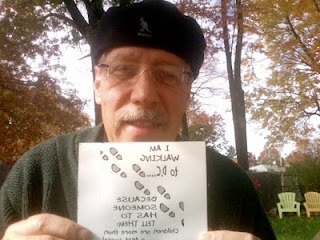 Well the battle against NCLB/RTTT continues, and I am still walking for change. Join me next July 30 and 31 for the Save Our Schools rally and teach-in at the American University in Washington DC. When you join the good fight you understand from the start that this is a life long fight. What better cause could I have then to make our leaders and policy makers understand that children are more than test scores, and so are their teachers.
Today I am going to evaluate the current education reform policies through the eyes of one of America's great thinkers from the "Greatest Generation" Mortimer J. Adler.
First and foremost in my humble opinion parents, teachers, and educators need to resist and fight these so-called education reform policies of NCLB!
As a man of conviction and strong faith I ask: What are Americans losing under the current education reforms of NCLB/RTTT? Readers be kind for today I am stepping outside my comfort zone.

Can we begin with an understanding that the current reforms promise that improvement of test scores will eliminate the achievement gap across race, special needs, poverty, urban, suburban, and rural communities. This model focuses on products, (test scores), and a system of rewards and punishments.  It does not provide equalizing resources, and therefore fails any measure of establishing equality in education. One could argue that NCLB/RTTT is actually rooted in Darwinism the strongest will survive.

I see no moral compass in the current reforms the reality is they are more of a swim or drown model of reform. The government is not here to assist your schools, but to police them by weeding out the weakest schools. NCLB/RTTT has no definition of what a well-educated person should be. They have numbers and standards, but no real definition of what being well-educated means. What we end up with is a public education system that defines a well-educated person as a passing test score. Conformity rules in this kind of model. We all take the same test, we are all fed the same curriculum, (something they are now seeking), we all read the same books, we all go to successful schools defined by high test scores. My god George Orwell, (author of 1984) couldn't have written this reform agenda any better.

This policy leaves me wondering where Mortimer J. Adler would stand on the notion of the current No Child Left Behind/Race To The Top policy? I grew up watching Mortimer on PBS television discussing the Great Books, and I remember taking them out of the library to read. They made me the man I am today. It was reading those books that called me to teaching, and those books that call me to this fight.

I think Dr. Mortimer would question any educational reform model that allows competition to drive reform rather than by providing the means to make all schools good, just, and equal. He would not accept a model that in essence tells parents, teachers, and their schools swim, sink or close.

No Child Left Behind/Race To The Top fails Mortimer’s to meet any of Mortimer’s six-great ideas.

1. Truth: The Department of Education claims that parents have a choice of schools. One might say Mortimer would argue any choice based on a lottery is not much of a choice, but more a luck of the draw. There are only extremely limited choices for parents under this reform policy. NCLB/RTTT fails the truth test!

2. Goodness: The Department of Education insists that a business model based on competition is good for America. Mortimer would argue there is no goodness in a system that abandons public schools not making adequate yearly progress. He would insist the Department of Education should actively help schools make adequate yearly progress. NCLB/RTTT fails the goodness test.

3. Beauty: One could ask does a Department of Education reform model based on competition have beauty? Mortimer might argue rather than beauty the current education reforms place test scores in reading, writing, and math above art and music. After all the focus of NCLB is on only certain test scores. If you don’t test it do you need to really need to teach it? What happens if your school decides to eliminate art and music to focus on reading, writing, and math? Well there are no punitive measures in NCLB/RTTT for eliminating art and music, or for that matter physical education, history, geography, and science. Many schools have eliminated or reduce instruction time spent on art, music, phyiscal education, history, geography, and even science. The Department of Education loves to mention these other subjects, and often shows photo opts of children signing and dancing at charter schools, but have no punitive measures for schools that chose to eliminate or reduce any of the above subject other than reading, writing, and math. NCLB/RTTT fails the beauty test!

4. Liberty: The current Department of Education reform policies focus on policing, rewarding some schools and punishing others who do not measure up based on standardized test results. For Mortimer the major focus of education is preparation for the duties of living in freedom. He said: “Education for freedom cannot itself be instituted until the educators understand the principles of freedom, until they realize that freedom is not an end in itself, but a consequence of justice, and an affair of rights and duties.”  Mortimer only has to look to the professional development component of NCLB/RTTTNCLB/RTTT fails the liberty test!

5. Equality: The Department of Education insists that an emphasis on standardized testing will weed out bad schools. Mortimer would argue standardized testing is too narrow to develop thinkers and citizens who will be responsible for the future of democracy. Mortimer said "In the case of good books, the point is not to see how many of them you can get through, but rather how many can get through to you." To Mortimer the man behind “The Great Books” movement the numerical measures of facts learned from books misses the point that some books change us for the better. Any education reform that does not make serious attempts at providing all schools with equitable resources is unjust. NCLB/RTTT fails the equality test!

6. Justice: This test is a simple. Does a law merely named No Child Left Behind that leaves millions of children behind really just? This one I am certain Dr. Mortimer would insist fails the justice test completely. Telling parents justice is coming is justice for some, and justice denied for others.  Justice administered by lottery is no more than justice denied. NCLB/RTTT fails the justice test!

Returning to my original question about: What are Americans losing under the current education reforms of NCLB/RTTT?
In 1940, (still in print) Dr. Mortimer wrote “How to read a book”. He said, "A good book can teach you about the world and about yourself. You learn more than how to read better; you also learn more about life. You become wiser. Not just more knowledgeable - books that provide nothing but information can produce that result. But wiser, in the sense that you are more deeply aware of the great and enduring truths of human life."

When education reform focuses solely on standardized testing books become isolated information that may or may not produce higher test scores. I said may or may not because after nearly a decade there is no real data to suggest the current reforms have produce higher test scores. While you may be learn to read you may not learn how to read a book from Dr. Mortimer's point of view. What are we losing? We are losing the opportunity to focus on making future generation deeply aware of the great truths of human life.

Silence and apathy are not acceptable when it comes to America’s children.
I am walking to DC again,
Jesse