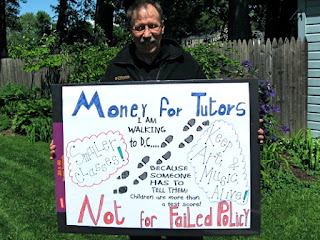 A President to President happening this week clearly marks NCLB/RTTT as a failure that is taking public education in America in the wrong direction. The letter is well written, and summarizes a great deal of what parents, teachers, education activists, and educators from all walks of life have been saying for over a decade. Mary Broderick the National School Boards Association President echoes the policies of the previous two Secretaries of Education, (Secretary Page and Secretary Spelling), and our current Secretary of Education Duncan of the United States Department of Education as demonizing and demoralizing our nation’s children and teachers. The National School Boards Association is not some radical fringe group, they are a center of the road organzation that has for decades advocated for sane education policies. Mary Broderick wrote a public letter to President Obama that is calling for a national dialogue > http://schoolboardnews.nsba.org/2012/04/nsbas-president-letter-to-obama/ < She writes:
"I urge you to convene a national dialogue, not made up of politicians, but including the breadth of educational opinion, to reconsider our educational direction. I would love to help you do this. Let’s ensure that each child has the tools to be successful. Let’s marshal the nation’s brain power and tap into the research, proven practice, and demonstrated evidence of excellence."
I echo Mary Broderick NSBA President’s call for dialogue. I invite The National School Boards Association to join Save Our Schools March who are already holding that dialogue, and are marshaling parents, teachers, school leaders, and leaders from diverse communities to come to our nation's capital this August 3-5 for the People's Education Convention.
I also extend a sincere offer to President Obama to join us at the People's Education Convention as well. I have one condition only Mr. President leave the private sector CEOs home. This is a People's Education Convention, and we want the people's voice to be heard. The people are calling you Mr. President to join us in shaping the future of public education in America. We are calling our president, the one who began his career in that rich grassroots river of democracy to return to that river once again. We are calling you to the people’s river President Obama to wade in the waters of hope and the waters of change. We the people who also have the audacity to hope.
Please forgive us if we have become mistrustful of private sector partners, and the United States Department of Education. Over the past decade it is our belief that their leadership was and is rooted not in sincere dialogue, but in bullying, marginalizing diverse voices that led to an endless series of harmful insensitive top down mandates that have demoralized our nation's public schools.
Please come President Obama, come hear the people’s view of what the current state of school reform has done to our children, teachers, public schools, and diverse communities. Come help us imagine change, come help build a new vision, a bottom up vision for a new direction for our public schools. Let’s us all build a vision of education reform that empowers children, teachers, all schools, and all communities.
Finally Mr. President we could use another voice with the audacity to hope at our convention. For Save Our Schools the mission has always been about putting the public, our parents, our teachers, our locally elected school boards, and diverse voices back into public education. We invite both you, and Mary Broderick NSBA President to join us at the People’s Education Convention this summer.
Sincerely
Jesse Turner
SOS National Steering Committee