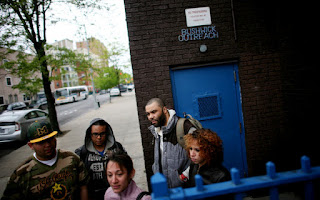 My Momma said sometimes you have to testify. Sometimes you have to stand up in public, and through your tears and your pain you tell your story, your narrative son. Well this week in New York people have been testifying. There are narratives, and there are narratives. There is a war of silence in New York City’s appointed board of education. A war of you do not matter waged against some of our nation’s most battled narratives. The narratives of those from the bottom 99% are not welcomed in Mayor Bloomberg’s world of power and influence. He prefers his narratives sweet and squeaky clean. His narratives trade millions of dollars everyday. His narratives wear Armani, and Crockett & Jones Leeds shoes, and they never testify in public. The mayor is oblivious to the voice of Emma Lazarus that young Jewish poet whose poem sits at the base of the Statue of Liberty.
"Give me your tired, your poor,
Your huddled masses yearning to breathe free,
The wretched refuse of your teeming shore.
Send these, the homeless, tempest-toss to me,
I lift my lamp beside the golden door!"
Her sonnet in 1883 testified that America was a nation of new narratives, a nation where the most battled narratives of the 99% are welcomed. The mayor does not get it. He does not hear it. He cannot see it.  Those narratives are not welcomed in his City Hall, or at the Mayoral Controlled Board of Education. There are narratives, and there are narratives. The narratives of an appointed board of education were not the ones Emma Lazarus had in mind when she wrote her sonnet. The narratives of the appointed are not elected, and they are the narratives of privilege and power that are most welcomed at City Hall. They will not be found at the base of the Statue of Liberty. Well there are narratives, and there are narratives. Emma’s narratives don’t eat at Masa’s restaurant.  Where there are just 26 seats in an elegantly designed Japanese restaurant in the Time Warner Center. There is no menu; all diners will spend about 3 hours having an unparalleled omakase experience. Her narratives are not welcomed at the Masa.
I said there are narratives, and there are narratives. Some narratives are Brooklyn born. Some narratives beat the odds, some narratives like a phoenix rise from the ashes of poverty.  The narrative of Iran Rosario is one of those New York narratives the mayor just does not get. Mr. Rosario walked into Bushwick Community High School 14 year ago, and beat the odds. He testified this week before Mayor Bloomberg’s appointed board of privilege. His story is not unique really, his story is not unheard of, but his story is as American as apple pie. They don’t serve apple pie at Masa’s. He stood up, and told that board of appointed privilege: “Where would I be without this school family? I would be in jail. I would be dead,” said Iran Rosario, a tall bear of a man who wandered in here as a lost 18-year-old and now returned 14 years later as a teacher. “Friends tell you what you want to hear; family tells you what you need to hear. They did that for me, and saved my life.”
His narrative is about a man who became a teacher, his narrative is about a man who came to give back, and a man who testified to a board of privileged number crunchers. His narrative, and the narratives many others are on the the mayor's chopping block. There faiths will be decided by an appointed board that was selected by America's most privileged mayor on Thursday night?
The hope of Bushwick Community High School, a school where all narratives are welcomed and given the opportunity to be educated is on the chopping block. The Panel for Education Policy is controlled by Mayor Bloomberg, and is set to lay off the principal and half the staff. “Give department officials credit: they don’t really try to argue their indictment on the merits, but on the metrics — that is, test scores and graduation rates.”

The Iran Rosario(s) are numbers, they are capital, and they are the unwanted narratives of a mayor and his appointed board of privilege. Somewhere there is a God who sees all. Somewhere there is a Jewish poet who loves the narratives of the tired, the poor, the wretched refuse, the homeless, and the tempest-tossed.  On Thursday night her lamp will be lit. The question is will the mayor’s appointed board snuff out the narratives Emma so clearly loved.
With the deepest Love, and respect for the narrative of one Iran Rosario,
Jesse The Walking Man Turner