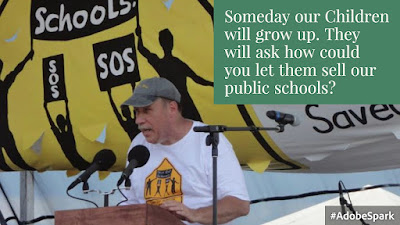 Robert F. Kennedy said about the pursuit of justice: "The problem of power is how to achieve its responsible use rather than its irresponsible and indulgent use-of how to get men of power to live for the Public rather than off the public."
I'm sitting here today wondering what Senator Kennedy would say about an education reform movement that lives off the public seeking to privatize our nation's public schools?  My thinking is, if Senator Robert F. Kennedy were alive last month, he would have joined the marchers at the Save Our Schools March for Public Education and Social Justice; just like he supported Cesar Chavez and the migrant farm workers in their struggle against the growers in California.  Justice requires Action. He would have marched with us, because we were marching for Public Education and Social Justice.  What matters about marching for Public Education and Social Justice, is that we still need to march; and are you still marching?  This struggle is so much more than one simple march.

Justice requires Action.
Diane Ravitch has become one of our most vocal outspoken opponents of high-stakes testing, national standards and a national curriculum, (CCSS), and inequity in our public schools. Some out there complain that Ravitch was not marching in 2000. Who cares? She marched in 2011; and then again in 2016.  I salute her willingness to grow and learn.  She is the only policy maker I know to admit she was wrong.  And more importantly, with her admission she decided to take up the cause of what is Right. Very few education reformers, policy makers, researchers, and politicians have the guts to do what she has done.  To change. To fight harder than ever for that change.
I applaud Diane Ravitch for refusing to stay with the pack.
I applaud her for stopping for just a moment, standing up, realizing she was wrong, and then using her voice in support us.
I salute Diane Ravitch for marching in 2011 and again in 2016.
I salute her for being the only education historian committed to telling the truth, even if it means admitting she was wrong initially.
I salute her for standing against the powerful elite, and choosing instead what's right for children, parents, and teachers.
WHEN you started marching matters less than "Are you marching today?"

In Diane Ravitch's new edition of The Death and Life of the Great American School System (2016) she writes:
"The original version of this book I criticized testing and choice, but continued my long-standing advocacy for national standards and a common national curriculum.  I thought that if every child experienced the same engaging curriculum, then every one of them would have a great education. Wrong again. I have come to realize that "high standards" and "rigorous testing" do not promote equity; instead, they produce high rates of failure for many students and widen the gap between those at the bottom and those at the top. Inevitably, those who fail to jump over an unrealistically high bar will be the children who need extra help and resources; they will be disproportionately impoverished children of color, children with handicaps, and English-language learners ... Standards on their own do not address the root causes of poor academic performance, which are generational poverty, racial segregation, and inequitable resources" (prologue xxiii-xxiv).

Justice Requires Action.  Action requires work.
The old bible parable Matthew 20:1-16: The Parable of the Workers in the Vineyard, where the workers in the field are paid to pick grapes for the land owner who sees a storm coming.  He needs his all his grapes picked today.  He offers one wage.  Some workers begin early in the morning; some don't start till noon.  By late afternoon he sees the need for more workers; they don't start working till near the end of the day.  Once the task was complete, some workers complain "it's unfair" The land owner reminds them that they accepted the wage that was offered to them; he had done no wrong... In my mind, it's the very same with our struggle for public education and social justice today. There is only one wage "Justice in our public schools for all".
Justice Requires Action. Action requires marching.
In 2010 when Save Our Schools was planning our march against NCLB/RTTT, Rita Slonet from Parents Across America contacted me to inform me that Ravitch would be speaking at Yale about her book "The Life and Death of the Great American School System" and suggested I attend.  I went to the event accompanied by my wife a Hartford Public School teacher. After the event I had the opportunity to speak with Diane, and I asked her if she could possibly come to DC to speak at our rally and march ~ even though we didn't have a dime to pay her.  She knew of me, "Jesse Turner, the guy who just walked from Connecticut to DC right?"  Yup ~ that guy. She said she would think about it...  Carolyn and I started walking towards our car. Well, at least I had asked her...  Before I started the car, Rita was calling me to confirm that indeed yes, Diane would come to speak at The Save Our Schools Conference, Rally and March in July 2011.

To the rumblers ~ Justice Requires Action. Action requires marchers. It doesn't matter when you started marching for justice in our public schools. What matters is, are you ready to march now?


In 2016 Save Our Schools March gathered a coalition for public education and social justice for another march on DC. Dr. Ravitch had released her 2nd edition book; we invited her to speak with us again. She did.

Justice requires action. Action requires you.
While "Save Our Schools Coalition" Committee did all the preparations for this March; they helped 1500 other beautiful brave souls march. The 1500 marchers set a new standard for education reform resisters. The only "standard" that matters in our Struggle for justice in America's Public Schools in 2016 is "Are you marching for Public Education and Social justice?" 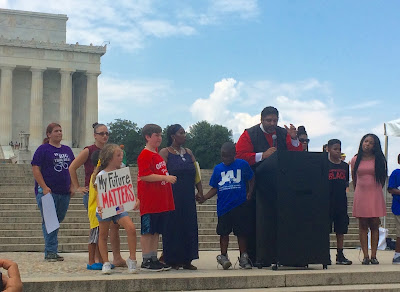 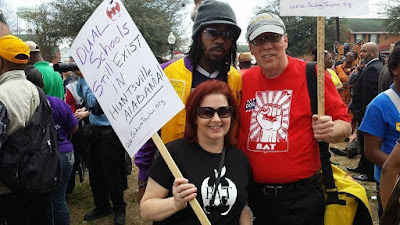