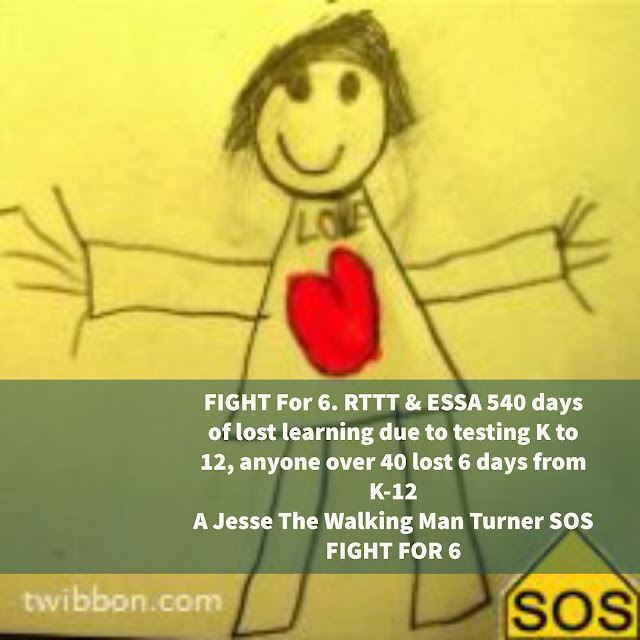 A Walking Man SOS: FIGHT For 6

As George Clinton would say it's time to get your funk on.   The Walking Man is ready to tear the roof off High Stakes Testing. I am launching my Fight For 6 Campaign, this Monday May 8th, at 10:00am on the Tom Ficklin Radio Show WNHH-LP 103.5 FM.

The plan is to explain how we went from 6 days of standardized testing to 540 of standardized testing. Everyone understands this one simple concept, testing days are lost learning days.  When I attended public school there was standardized testing.  We had it once in elementary school, once in middle school, and once again, in high school.  Back in the day, teachers would never think of practicing or preparing for those assessments.   Teachers were told that practicing would invalidate the results. Those of us 40 years of age and older, lost about 6 days of learning over our entire public school experience to high stakes testing.  Today's children spend about 540 days on preparing, practicing, and taking these assessments. That equals 3 years of 'lost learning' by the time our children graduate. We hear a great deal about data and accountability these days from politicians, Education Reformers, and CEOs. Do they really care about accountability?   The actual trend for our high school reading/math test scores have declined, or at the very least remained stagnant for the past 30 years. This decline came with massive expenditure over the past 15 years for more rigorous standards and testing. If these politicians cared about accountability, wouldn't they try something new?

Horace Mann, often referred to as the father of America's public education, addressed the vast inequalities between the 6000 public schools he visited during his time as the Massachusetts Secretary of Education in 1848. No other Secretary of Education anywhere or in any era has ever visited all the public schools under their guidance. His report to the Massachusetts Board of Education in 1848 "Now, surely, nothing but Universal Education can counter-work this tendency to the domination of capital and the servility of labor. If one class possesses all the wealth and the education, while the residue of society is ignorant and poor, it matters not by what name the relation between them may be called; the latter, in fact and in truth, will be the servile dependents and subjects of the former." (H. Mann, Report Number 12, 1848).

What would Horace Mann have to say 169 years later about those vast inequalities?  In 2015, Education Week Quality Counts report found 49 states spending more money on their wealthy schools than their poor schools.  Connecticut is one of those 49 states.
What has America done to make equity real in our public schools?   We have created a public school funding system based on property taxes. A system that assures the quality of education is determined by a person's zip code.
And returning once again to Mann's words : " If one class possesses all the wealth and the education, while the residue of society is ignorant and poor, it matters not by what name the relation between them may be called; the latter, in fact and in truth, will be the servile dependents and subjects of the former."  Marcus Garvey would call it a system of Mental Slavery. The name of the chains on America's Black, Brown, Special Education, and Poor children is INEQUITY.
In 1892 the NEA Committee of 10, instead of working on equity and justice for all in our nation's public schools, began experimenting with common curricula, universal assessments and more rigorous standards. To them the solution was not ending inequity, but promoting new subject curriculum taught in English, testing and more rigorous standards. Does this sound familiar today? The only difference between those reforms of 1892,  and the ones of today is, 125 years later we went from one high school exit exam to 540 days of high stakes assessments.

Diane Ravitch writes: “Anyone who truly cares about children must be repelled by the insistence on ranking them, rating them, and labeling them. Whatever the tests measure is not the sum and substance of any child. The tests do not measure character, spirit, heart, soul, potential. When overused and misused, when attached to high stakes, the tests stifle the very creativity and ingenuity that our society needs most. Creativity and ingenuity stubbornly resist standardization." 2013, Reign of Error: The Hoax of the Privatization Movement and the Danger to America's Public Schools


How did this loss of learning time happen?

Education Reformers, CEOs, and our Political Leaders sold a lie to the American public; More testing and rigorous standards will bring equity to public schools.  The very people furthest removed from children, classrooms and teachers, sold parents the lie; It's testing, not equity that our public schools need. The people Dr. Ravitch describes as not caring for children; the people who are demanding we rank, rate, and label every child in America as proficient or not. The people who most likely do not send their own children to public schools.  Often, the very people who are profiting from testing, or raking in massive campaign contributions.  Those who claim equity will come through false school choices without equity.   The ones who claim more testing and standards will save Black, Brown, Special Education, and Poor children. These people  have not studied America's public school system. They have no clue what equity and justice should look like in our public schools. The truth, American public schools have never known a single day of equity and justice for Black, Brown, Special Education, and Poor children.  I would argue that these education reforms have increased those vast inequalities that Horace Mann noted 169 years ago.
Our leaders must begin to really care about equity and justice for Black, Brown, Special Education, and Poor children in our public schools.  They need to address the constant elephant in our classrooms "Inequity" over the last 169 years.
I want Equity and Justice Now, not more testing. The only standard needed in our public schools is Equity Now!
Fight For 6,
Jesse The Walking Turner

If you like to hear the song that inspires my walk over the Avon Mountain today....its Parliament Mother Ship's TEAR The Roff Off https://www.youtube.com/watch?v=od-5gCO_PGE
Posted by Jesse Turner at 8:06 PM