I Will Not Be Complicit In America's Apartheid Schooling

rhttps://abcnews.go.com/US/wireStory/schools-nationwide-brace-cuts-financial-crisis-70967682?cid=clicksource_4380645_2_heads_hero_live_headlines_hed Link to one of the many articles predicting the coming school budget cuts.

So, now comes this pandemic that clearly focuses the light of injustice and inequity on these schools. Remote learning further pointed out a digital divide that exacerbated inequity in Black and Brown communities.

Now, a caring nation that values all children would remedy these inequities, not cuts budgets. Jonathon Kozol calls our public education system, "Apartheid Schools." Jonathan Kozol said:
"There is something deeply hypocritical in a society that holds an inner-city child only eight years old "accountable" for her performance on a high-stakes standardized exam but does not hold the high officials of our government accountable for robbing her of what they gave their own kids six or seven years before." ~ Kozol, (The Shame of the Nation: The Restoration of Apartheid Schooling in America).

Trust me, our work is to liberate our nation's children from 170 years of apartheid schooling. Until then, these budget cutters should be named for who they are. The leaders and evildoers of America's Apartheid School System.

Trust me, there is a connection between this police brutality that murders in Black and Brown communities and the brutality of inequity in our public schools.If you are silent? Then you are complicit in 170 years of white supremacy?
I will not be complicit in this evil. I am a member of the resistance uniting to save our schools.

I am a proud member of a community that rejects complicity,
Jesse The Walking Man Turner
Member of USOS 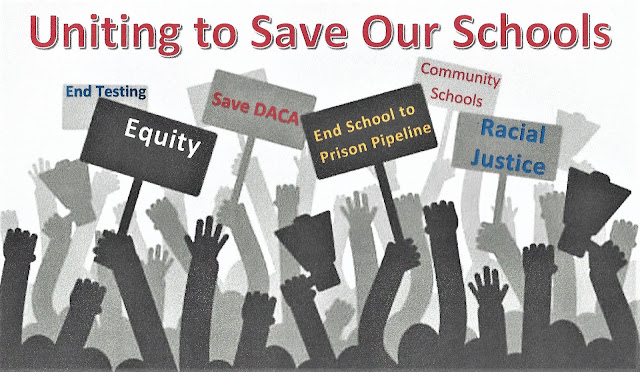 If you like to listen to the tune I listen to on my walk this morning? Its the Play For Change cover of "Teach Your Children". > https://www.youtube.com/watch?v=P5AuFDHdrrg <