I am walking to DC 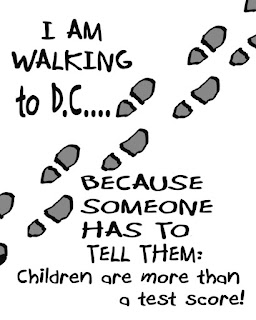 Anthony Cody wrote another excellent piece in Education week: "Education Reform Dichotomy: Big Choices Ahead", (http://blogs.edweek.org/teachers/living-in-dialogue/2013/01/the_education_reform_dichotomy.html). Anthony ask people to respond.
My response is let us act, let us continue to fight back, let us push Civil Disobedience to the max, children are suffering. This is the time to occupy, march, sit in, disrupt, and yes for the Walking Man to Walk to DC again. Silence and apathy are not acceptable. Since NCLB's birth over a decade ago we have see our nation's schools becomes more segregated, less democratic, spend hundreds of billions on failed reforms, false choice, demoralized both students and teachers via more and more meaningless testing.
My thinking is NLCB created one lost generation, and RTTT is losing another.
I don't see side effects Anthony, but Collateral damage that David Berliner wrote about in 2007 "Collateral Damage: How High-Stakes Testing Corrupts America's Schools" Real lives have been destroyed by No excuse policy pushers.
Dialogue yes, but as Fredrick Douglas said: "Power concedes nothing without a demand. It never did and it never will."
Let us admit the No Excuses group is not backing down, conceding nothing, and seeking more top down control. They don't see children they see proficiency scores, profits, and power. They don't dialogue, they don't listen, and they care about children. Dialogue to them is we talk you listen not us.
I am still walking, still marching, and I'll be occupying Secretary Status Duncan's DOE in DC in April at Occupy the DOE 2.0 : The Battle For Our Public Schools. After that I plan my next next walk to DC this summer.
Sincerely
Jesse The Walking Man Turner
PS Read Anthony Cody's Blog, reply, and consider following him. I have always found him to be honest, fair, accurate, and informative.

Still listen to that old marching song Ain't gonna let nobody turn me around : http://www.youtube.com/watch?v=c5Z1trynEHs
Posted by Jesse Turner at 1:41 PM