Before there was a United States Department of Education 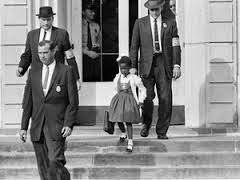 1954 The Supreme Court rules on the landmark case Brown v. Board of Education of Topeka, Kans., unanimously agreeing that segregation in public schools is unconstitutional. The ruling paves the way for large-scale desegregation. The decision overturns the 1896 Plessy v. Ferguson ruling that sanctioned "separate but equal" segregation of the races, ruling that "separate educational facilities are inherently unequal." It is a victory for NAACP attorney Thurgood Marshall, who will later return to the Supreme Court as the nation's first black justice.

1957 (Little Rock, Ark.) Formerly all-white Central High School learns that integration is easier said than done. Nine black students are blocked from entering the school on the orders of Governor Orval Faubus. President Eisenhower sends federal troops and the National Guard to intervene on behalf of the students, who become known as the "Little Rock Nine."

1962 James Meredith becomes the first black student to enroll at the University of Mississippi. Violence and riots surrounding the incident cause President Kennedy to send 5,000 federal troops.

1974 Lau v. Nichols U.S. Supreme Court: When children arrive in school with little or no English-speaking ability, "sink or swim" instruction is a violation of their civil rights, according to the U.S. Supreme Court. http://en.wikipedia.org/wiki/Lau_v._Nichols


The United States Department of Education policies continues to chase test scores and standards rather than lead the fight for equity and justice in our public schools. The silence of our U.S. Department of Education on equity is shameful. Mr. President, members of Congress and the Senate, it's time to start doing something about inequality, and dump those do nothings NCLB, RTTT, CCSS, PARCC and SBAC. Once you stood by a six-year old little girl named Ruby Bridges, and we respected and loved you for it. Morality matters more than test scores. Isn't it time you started standing by our children again?
Love you Ruby,
Jesse The Walking Man Turner

If your wondering what the Walking Man is listening to on this bright April morning it "People Get Ready" by the Impressions http://www.youtube.com/watch?v=l04yM7-BWbg 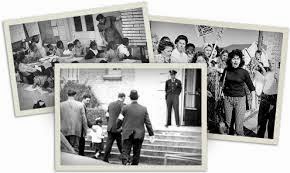