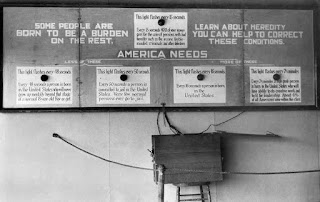 There was another age when America was obsessed with testing, an age where progressive Americans worried that our nation would not be able to compete economically in the future, an age where these very progressive people decided they should create tests that would determined who is a burden and who is not. The American Eugenics Movement sterilized over 60,000 women based on their intelligence testing. They became the model for the Nazis "Master Race".
It's wise to study our past, and to look at our policy makers present focused on testing in our schools. Testing failed Americans at the turn of the 20th century, and it is failing our children in the 21st century. History repeats itself, and it's time we learned from it.
Children are more than test scores,
Dr. Jesse Patrick Turner

PS, I am less than two week from beginning my walk from Connecticut To DC. At this point we have 4 radio shows following the walk, and asking for weekly updates, over 17 connecting the dots Walking Man events planned. I can't wait until I start walking, meeting, and hearing from students, parents and teachers along the way. I am a man on fire, a man on a mission, a mission inspired by a love of children, their teachers, and their public schools. I am one man walking in the name of love to DC,
Jesse
PS if you like to listen to what inspired my walk to day...it's Peter, Paul and Mary's "If I had a hammer" https://www.youtube.com/watch?v=HTvr79Oe5w8