Who will stand up against the lies of school choice? 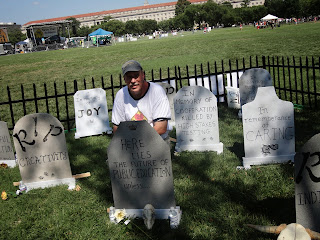 I hear this Psalm in my dreams. "Who will rise up for me against the evildoers? or who will stand up for me against the workers of iniquity?"
I rise every day saying here I am Lord. How could I call myself a Professor of Education without advocating for children, parents, teachers, and our local schools without standing up against those who constantly are assaulting the humanity of our children.
This is National Charter School week, what you won't hear from Washington DC, any Governor's mansion, or the mainstream media is in Florida alone in just three countries we have 200 million dollars in fraud. You won't hear that the FBI is investing fraud involving Charter schools in almost all major cities.
You won't hear that the data indicates only 17% of children attending charter schools are out performing the students they left behind. Not one word will be written about the billions being spent on an education reform where 83% do perform no better or worst on testing. No one in the media is going to tell parents Charters have the highest turn over rate for teachers.
No one wants to stop the money train, the train with no rules, the train that answers to no one, and does more to racially isolate children of color than any other type of school.
I am walking to DC,
Because children and parents deserve more than a lottery,
Because choice without equity is the wrong choice,
Jesse

If you want to listen to what I was listening to on my walk this morning...it's "Here I Am Lord" by Michael Talbott  > https://www.youtube.com/watch?v=qFFhZM4rn-c <