As I watch the millions of refugees fleeing war to Europe I can’t help thinking about 11 million human beings living in hiding in America. There but, for the grace of God. I am the grand child of Irish immigrants.  One side fled famine, and the other an oppression that outlawed their language, their history, and songs. I am an American who not only knows where he stands today, but remembers where he came from.
There is an old Irish Rebel song "Some say the devil is dead" we used to sing it after the Ceili (Step dancing) was done. After we crowned our champions. When the after gathers pulled out fiddles, tin whistles, mandolins, Uillieann pipes, banjos, bodhrans, for a good old Sean-nós.  Where we lost our American for a few hours, where we became Irish once again, and old songs reminded us of long journeys through famine and lost holding onto an enduring love of who we were. Where anything was possible, where freedom rode songs, and we were all freaking brilliant singers. After a pint or two he would jump up on a table, dance his jig, and start it all off. He would be joined on that table by one of our champions, the drink would be pouring like water, and the singing would begin….

On July Fourth we sing Yankee Doodle, shoot fire works, and sing God Bless America. But on the days we were Irish, and the dancing and story telling were done, we were immigrants, and we rode on songs.
One brother fought in the 16 rising for Ireland’s freedom, and the other fought on the Green Fields of France for America in the war to end all wars.  One lives to have sons who would fight in World War II, and the other became the tears of lost we still sing about on the days we are Irish.
I love being the child of immigrants. I love being the grand child of Irish immigrants. Somehow it makes me more American. I remember driving my grandfather home on those Irish nights. The old fellow never understood why one brother had to die, and the other lived.  How he never saw him laid in the ground, never held his mother and father at the grave. It’s an old story, an immigrant hurt felt by millions fleeing their woes. As soon as the key started the car, he would say little Jess take me by the river. Take me where I can see that beautiful lady and her lamp. Behind the old ballpark we would park the car, and walk out to the pier. We would watch that Lady of the Lamp. He would share his stories of two brothers running through fields, jumping on horses bareback, and throwing stones at imaginary giants. Stories of who would get the girl, who would win Ireland’s freedom, and who would go to America. He would say the dice were thrown long ago.
He would look me in the eye, and say you’re an American, but that Orange, White, and Green runs deep in your soul. He would end the night pointing to the Statue of Liberty, and say we fought for her. No other nation in the world threw open her doors to all comers.
As the first ambers of the morning Sun started breaking on cue he says do you know her my American grandson? That’s Emma Lazarus Little Jess? She was the young Jewish American Poet who won the world’s heart with her poem “The New Colossus”. Then he would start:

“Not like the brazen giant of Greek fame,
With conquering limbs astride from land to land;
Here at our sea-washed, sunset gates shall stand
A mighty woman with a torch, whose flame
Is the imprisoned lightning, and her name
Mother of Exiles. From her beacon-hand
Glows world-wide welcome; her mild eyes command
The air-bridged harbor that twin cities frame.
"Keep, ancient lands, your storied pomp!" cries she
With silent lips. "Give me your tired, your poor,
Your huddled masses yearning to breathe free,
The wretched refuse of your teeming shore.
Send these, the homeless, tempest-tost to me,
I lift my lamp beside the golden door!"

So come at me all ye haters,
You can’t touch this child of immigrants who rode a ship into a bay where Emma Lazarus’s New Colossus held her lamp calling out:
"Give me your tired, your poor,
Your huddled masses yearning to breathe free,
The wretched refuse of your teeming shore.
Send these, the homeless, tempest-tost to me,
I lift my lamp beside the golden door!" 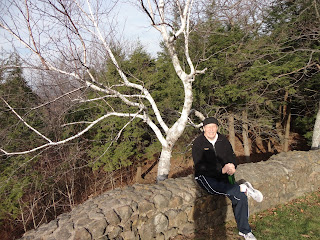 If you want to know what this Walking Man listened to this morning on this beautiful Fall morning? It's my grandfather's favorite Irish Balladeer Paddy Rielly singing "Deportee" written in remembrance of a plane crash that killed migrant Mexican laborers on their way home from America.
https://search.yahoo.com/search;_ylt=AwrBT8N8fjdWsp8AvzVXNyoA;_ylc=X1MDMjc2NjY3OQRfcgMyBGZyA3lmcC10LTkwMQRncHJpZANtSFJZa3h5QlJkQ2QxQlZJaVN0akhBBG5fcnNsdAMwBG5fc3VnZwMxBG9yaWdpbgNzZWFyY2gueWFob28uY29tBHBvcwMwBHBxc3RyAwRwcXN0cmwDBHFzdHJsAzI4BHF1ZXJ5A3V0dWJlIHBhZGR5IHJpZWFsbHkgZGVwb3J0ZWUEdF9zdG1wAzE0NDY0Nzc1Njg-?p=utube+paddy+rieally+deportee&fr2=sb-top-search&fr=yfp-t-901&fp=1