Dear Bigot in the White House 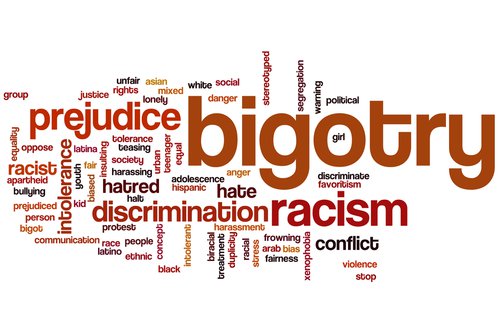 Dear Mr. President, about this telling United States Congresswomen to go back home. It is simply astounding how little you know about our United States Constitution.
I am not certain if you ever studied U.S. History in school. Perhaps this is why you threaten to sue any school/university you went to if they release your transcripts?
However, as a former social studies teacher, I would be remiss if I did not point out two important sources for understanding who is eligible to serve in our United States Congress, and who is a citizen of our United States of America.
First, Article 1, Section 2 of the United States Constitution: "No Person shall be a Representative who shall not have attained to the Age of twenty-five Years and been seven Years a Citizen of the United States, and who shall not, when elected, be an Inhabitant of that State in which he shall be chosen".
Second, I like to point out something called the 14 Amendment in our United States Constitution.
"All persons born or naturalized in the United States, and subject to the jurisdiction thereof, are citizens of the United States and of the state wherein they reside. No state shall make or enforce any law which shall abridge the privileges or immunities of citizens of the United States; nor shall any state deprive any person of life, liberty, or property, without due process of law; nor deny to any person within its jurisdiction the equal protection of the laws."
No amount of hate you hold in your heart changes the fact that Reps. Alexandria Ocasio-Cortez of New York, Ilhan Omar from Minnesota, Michigan's Rashida Tlaib and Ayanna Pressley from Massachusetts are members of Congress and United States Citizens.
Next, it is blatantly clear, that your rant targeted Black and Brown Female members of Congress. Which leads to something else I like to point out to you as well.
In Webster's On-Line Definition of Bigot: "a person who is obstinately or intolerantly devoted to his or her own opinions and prejudices especially: one who regards or treats the members of a group (such as a racial or ethnic group) with hatred and intolerance."
Finally, I have an important heads up for you. Come November 3, 2020, We the people, are going to fire the Bigot in the White House.
Jesse The Walking Man Turner


If you want to listen to the tune I listened to on my walk this morning its Paul Cauthen "Everybody Walking This Land" https://www.youtube.com/watch?v=L_ieGSsWd8U