Somebody Call the Secretary of the Status Quo Arne Duncan 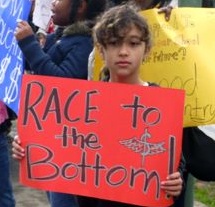 I  wonder if Secretary Duncan understands the issue of equity? Has he even read the NAACP January resolution on charter schools? The prize is and has always been equity not some race to nowhere that leaves some schools with more funding, more supports, wrap around services, and more segregated than ever before. I salute the leadership of the NAACP for reminding America the prize is not test scores, but equity.
So friends copy and paste this one to every DOE in the nation? The Status Quo is NCLB, and has run the show for over a dozen years now.
The Status Quo in DC has spent over a trillion dollars on new testing and standards all the while ignoring inequity in our schools.
Secretary Status Quo Duncan had his chance to change the status quo, but instead has done everything in his power to maintain and to preserve a system of inequity.
See you in DC March 30-April 2 Mr. Status Quo at Occupy the DC DOE,
Still marching,
Jesse
NATIONAL ASSOCIATION FOR THE ADVANCEMENT OF COLORED PEOPLE 4805 MT. HOPE DRIVE • BALTIMORE, MD 21215-3297 • (410) 580-5777
LEON W RUSSELL
Chairman, Resolutions Committee National Board of Directors
BENJAMIN TODD JEALOUS
President & Chief Executive Officer
ROSLYN M. BROCK
Chairman, Board of Directors
The National Association for the Advancement of Colored People (NAACP) is the nation’s oldest, largest and most widely-recognized grassroots based civil rights organization. Formed in 1909 by a multiracial group of progressive thinkers, the NAACP is a nonprofit organization established with the objective of ensuring the political, educational, social, and economic equality of people of color. For over 102 years, the NAACP has challenged this nation to uphold its promise of equal opportunity toward the goal of eliminating racial prejudice and removing all barriers of racial discrimination through democratic processes.
In a process established by the NAACP Constitution, this resolution was adopted by the delegates to the 101st Annual Convention in Kansas City, Missouri, during the legislative session in July, 2010. It was subsequently ratified by the NAACP National Board of Directors at its meeting on October 15, 2010. This resolution is now the policy of the Association, and is “binding on the Board of Directors, the Executive Committee, the Officers, and all units.”
WHEREAS, charter schools are public schools which were originally designed to explore new approaches to educate students; and
WHEREAS, in some cases, charter schools have become a school model that is used to segregate students; and
WHEREAS, charter schools have too seldom informed the education community regarding innovative instructional strategies that accelerate academic achievement in the general population of students; and
WHEREAS, the Center for Research in Educational Outcomes (CREDO) which examined charter school data in fifteen (15) states and the District of Columbia confirmed that only 17% of the charter school students in the study outperformed their peers, while 46% performed no better and 37% performed worse; and
Charter SchoolsWHEREAS, charter schools operate more autonomously than traditional public schools in the use of funds, adherence to state laws and school policies, selection and removal of students, and the selection and removal of staff, thus creating separate and unequal conditions for success; and
WHEREAS, charter schools draw funding away from already underfunded traditional public schools; and
WHEREAS, the NAACP recognizes that at best, quality charter schools serve only a small percentage of children of color and disadvantaged students for whom the NAACP advocates relative to said population left behind in failing schools; and
WHEREAS, the NAACP recognizes the urgent need to provide quality education for all children, not only those fortunate enough to win lotteries to attend existing quality charter schools; and
WHEREAS, the NAACP is committed to finding broad based, effective solutions for immediate implementation to improve the quality of public education for all children.
THEREFORE, BE IT RESOLVED, that the NAACP will strongly advocate for immediate, overarching improvements to the existing public education system; and
BE IT FURTHER RESOLVED, that the NAACP rejects the emphasis on charter schools as the vanguard approach for the education of children, instead of focusing attention, funding, and policy advocacy on improving existing, low performing public schools and will work through local, state and federal legislative processes to ensure that all public schools are provided the necessary funding, support and autonomy necessary to educate all students; and
BE IT FINALLY RESOLVED, that the NAACP will urge all of its Units to work to support public schools throughout the nation to educate all children to their highest potential.
Roslyn M. Brock Chairman National Board of Directors
Leon Russell Benjamin Todd Jealous Chairman President & CEO Committee on Resolutions
If you are wondering what I was listening to on my walk this morning:
http://www.youtube.com/watch?v=130J-FdZDtY&feature=related
Still marching Momma, and still listening, and still believing in that dream,
Jesse
Posted by Jesse Turner at 10:08 AM