I have seen the enemy, the enemy is not a homeless mother 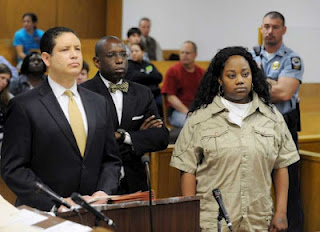 Let's keep truth simple, a homeless mother should not go to jail for trying to get her child a better education in a public school system rooted in inequality.

F. Scott Fitzgerald wrote: "Let me tell you about the very rich. They are different from you and me. They possess and enjoy early, and it does something to them, makes them soft where we are hard, and cynical where we are trustful, in a way that, unless you were born rich, it is very difficult to understand. They think, deep in their hearts, that they are better than we are because we had to discover the compensations and refuges of life for ourselves. Even when they enter deep into our world or sink below us, they still think that they are better than we are."
Is this the America we want? An America where schools are places where the quality of a child's education depends on their zip code? Tanya McDowell is not a criminal she is a mother trying to beat a system that is rooted in inequality. The people are tired of education reforms based on competitions, lotteries, and zip codes. I have seen the enemy, and the enemy is not the homeless, but a system that goes after a homeless mother.


I have seen the enemy,


Tanya McDowell is not the enemy,


Parents are not the enemy,


Children are not the enemy,


Teachers are not the enemy,


You can read Savy Sister's blog telling it through her tears in the link below:

If you are wondering what the walking man is listening to on his walk this morning it's I hear them all by Old Crow Medicine Show:
http://www.youtube.com/watch?v=pD3jsS-sL1Q