We have met the enemy, and they are not the Girl Scouts 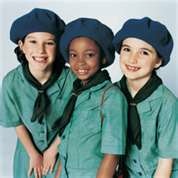 Who are the people elected to office? The very same people telling America that testing and privatization can save our schools. Let's all come to the realization that many of our lawmakers are not smarter than a fifth-grader.  Allow me to introduce an elected official, Indiana State Representative Bob Morris who clearly is not smarter than a fifth-grader.
This week Bob Morris Indiana State Representative refuse to sign resolution honoring the 100 Anniversary of the Gril Scouts of America. He sent the following letter to his colleagues urging them not to sign it as well.
http://usnews.msnbc.msn.com/_news/2012/02/21/10469492-lawmaker-radical-girl-scouts-out-to-destroy-american-family-values
Here is his letter: Verbatim text of letter from Indiana state Rep. Bob Morris, R-Fort Wayne, to fellow lawmakers.


February 18, 2012
Members of the Republic Caucus
Dear Fellow Representatives:
This past week I was asked to sign a House Resolution recognizing the 100th Anniversary of Girl Scouts of America. After talking to some well-informed constituents, I did a small amount of web-based research, and what I found is disturbing. The Girl Scouts of America and their worldwide partner, World Association of Girl Guides and Girl Scouts (WAGGGS), have entered into a close strategic affiliation with Planned Parenthood. You will not find evidence of this on the GSA/WAGGGS website—in fact, the websites of these two organizations explicitly deny funding Planned Parenthood.
Nonetheless, abundant evidence proves that the agenda of Planned Parenthood includes sexualizing young girls through the Girl Scouts, which is quickly becoming a tactical arm of Planned Parenthood. Planned Parenthood instructional series and pamphlets are part of the core curriculum at GSA training seminars. Denver Auxiliary Bishop James D. Conley of Denver last year warned parents that "membership in the Girl Scouts could carry the danger of making their daughters more receptive to the pro-abortion agenda."
A Girl Scouts of America training program last year used the Planned Parenthood sex education pamphlet "Happy, Healthy, and Hot." The pamphlet instructs young girls not to think of sex as "just about vaginal or anal intercourse." "There is no right or wrong way to have sex. Just have fun, explore and be yourself!" it states. Although individual Girl Scout troops are not forced to follow this curriculum, many do. Liberal progressive troop-leaders will indoctrinate the girls in their troop according to the principles of Planned Parenthood, making Bishop Conley's warning true.
Many parents are abandoning the Girl Scouts because they promote homosexual lifestyles. In fact, the Girl Scouts education seminar girls are directed to study the example of role models. Of the fifty role models listed, only three have a briefly-mentioned religious background – all the rest are feminists, lesbians, or Communists. World Net Daily, in a May 2009 article, states that Girl Scout Troops are no longer allowed to pray or sing traditional Christmas Carols.
Boys who decide to claim a "transgender" or cross-dressing life-style are permitted to become a member of a Girl Scout troop, performing crafts with the girls and participate in overnight and camping activities – just like any real girl. The fact that the Honorary President of Girl Scouts of America is Michelle Obama, and the Obama's are radically pro-abortion and vigorously support the agenda of Planned Parenthood, should give each of us reason to pause before our individual or collective endorsement of the organization.
As members of the Indiana House of Representatives, we must be wise before we use the credibility and respect of the "Peoples' House" to extend legitimacy to a radicalized organization. The Girl Scouts of America stand in a strong tradition that reflects with fidelity the traditional values of our homes and our families. The tradition extends from coast-to-coast and back through the past one hundred years. That said, I challenge each of you to examine these matters more closely before you extend your name and your reputation to endorse a group that has been subverted in the name of liberal progressive politics and the destruction of traditional American family values.
I have two daughters who have been active in the Girl Scouts of Limberlost Council in Northeastern Indiana. Now that I am aware of the influence of Planned Parenthood within GSA and other surprisingly radical policies of GSA, my two daughters will instead become active in American Heritage Girls Little Flowers organization. In this traditional group they will learn about values and principles that will not confuse their conservative Hoosier upbringing.
I have been told that, as of today, I am the only member not supporting the Girl Scout Resolution.
I challenge each of you to examine these matters and to decide carefully whether or not to sign the resolution.
Respectfully,
Bob Morris

Has anybody noticed he did not say anything about the Boy Scouts? Perhaps it is only the girls that are dangerous to Representative Morris? We can not afford to elect crazies like this to America's legislatures any longer.
First let's all just agree that doing a little internet research does not reach the bar of any fifth-grader's research report assignment. I don't even know where to go with this nonsense. It is becoming scary, because electing people like this is placing our democracy at risk.
Children are more than test scores, and the Girls Scouts deserve better than shoddy internet research.
If you like to make a donation to the Girl Scouts of America, or find out how to buy some tasty radical cookies go: http://www.girlscouts.org/
Finally let's all show these crazies what democracy looks like this fall, and vote them out of office?
Ready to occupy the DOE in DC this March 30. 31, & April 1 & 2,
Jesse The Walking Man also votes!

If case you are wondering what inspired the Walking Man on his walk this morning: MAKANA's We Are The Many You Are The Few:
http://www.youtube.com/watch?v=xq3BYw4xjxE&feature=player_embedded