My Momma loved listening to Dr. Martin Luther King on our little black and white TV. She would have us all down on our knees in prayer every time someone arrested, or did something mean to him.
It was like we knew Dr. king personally, and in some ways I think we all knew him. I grew up in a house with a missing father. Her thinking was there could be no better role model for her only son than Martin.
She brought us a 33 vinyl record album of Dr. King's "I have a dream speech", and we listened to it on Sunday afternoons after church. We listened as we looked through images of that speech in the only Life magazine we ever had in that old apartment.
She told us every once in awhile a man needed to take stand and testify before his brothers and sisters. We only have to do it once in awhile. Now she was sure to let us know Martin did it every single day. The only picture of a black man in our house was of Martin. His picture was right next to the Pope's picture.
She cried for weeks after Martin was assassinated. We all cried, and I still find myself crying some nights.
Like my Momma said every once in awhile a man has to take a stand, and testify. Well this spring I am going to tell it on a mountain at Occupy the DOE in DC. I have carried the hurt of a thousand children, a thousand parents, and a thousand teachers inside of me for over a decade of NCLB. I have walked, talked, blogged, and now I am going to testify and occupy the DOE with my brothers and sisters.

Come one, come all, and if you can't make it to DC then make a sign, grab a friend, and occupy a DOE near you for an hour or two in your state.
Come tell it on a mountain that the people are taking back their public schools.
Still walking, still marching, and ready to occupy the DOE,
Jesse
For a peek at the schedule for Occupy the DOE click
http://unitedoptout.com/occupy-the-doe-in-dc-schedule-march-30th-to-april-2nd-2012/ 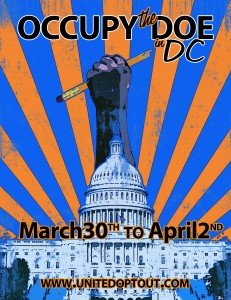