Public notice to all under preforming elected officials 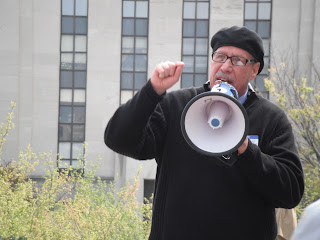 Dr. Mark Naison from Fordham University recently reported our elected officials were concern about our public schools. He explained their Education Reform plan to underfund our schools, and force our poorest and most needy schools to actually compete for limited resources based on test scores. He reported you are willing to save tax breaks for the wealthy, the connected and the powerful.


We were shock of course about your lack of listening skills. So we the people gather together to evaluate your performance. We found it severely lacking to say the least. Here is what we found:
Hello Local Public Elected Officials,
Let us be blunt with you. In these difficult times, we are not going to vote for officials unless they show results. The data clearly points to below expectations performances. You are in need of a rigor, grit, and tough up intervention program. Now I'd like to be kind and say those results could be demonstrated:
Higher wages for working people,
Make the wealthy pay their real share of taxes,
No more welfare for giant corporations,
Fully funded schools,
Wrap around services, and sport programs,
Adult educations classes in our public schools in the evenings,
Free health care for everyone,
Fair housing for working people,
No more public money going to franchise teams for stadiums,
End non-profit status for profit for NFL teams.
There are many others as well, because you have definitely forgotten you work for the people. You have not done anything for the 99%, and it going to be hard to turn around, I have to be very blunt on this you have been found lacking. We are putting into our turn around program for crappy legislators. If you can't turn it around by the next election, we are just going to vote you out.
Sincerely,
Your employers, the voters
PS a bunch of us are headed to DC to deliver this message to you personally at the Peoples March for Public Education and Social Justice on July 8.
Power to the people,
Jesse The Walking Man Turner

If you like to listen to what this Walking Man listened to on his walk this morning..its Natalie Merchant's "This House Is On Fire" https://www.youtube.com/watch?v=3w5yFE7t8MI 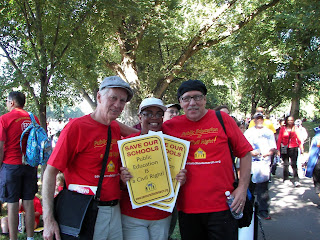 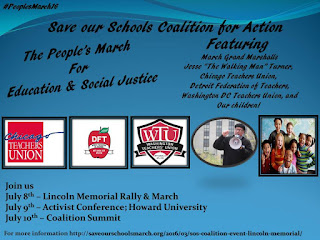