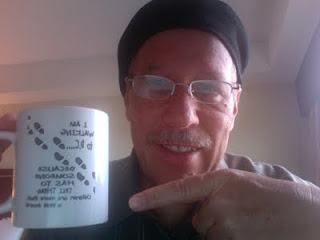 People often ask me "why are you walking again"?  I give them the 30-second sound bite first, because children are more than test scores...
Some persist, and I go into the 3 minutes talk.... NCLB has spent nearly one trillion-dollars on education reforms that ignored class size, that failed to hire an army of tutors, that reduced the curriculum to reading, writing, and math pushing out history, art, music, and even physical education for many poor schools...
Finally, for those who persist further, even saying "we understand, we agree, but what can one man do walking? "  That's when I sit down, and we talk, we talk until I have explained and the listener understands "that  this is a Democracy At Risk, this is a Generation At Risk, this is Our Country, Our Children, and we can simply watch it slip away, or we can take it back".

I quote Howard Zinn: “Don't depend on our leaders to do what needs to be done. Because whenever the government has done anything to bring about change, it's done so only because it's been pushed and prodded by social movements, by ordinary people organizing."
Somewhere in the conversation it always comes up, “so you just started walking"?  And I continue to  explain, "Back in 2004 I put together my very first Children Are More Than A Test Score Conference at CCSU. That was all I thought was needed back then, but I've since grown tired of just talking and debating. By 2006 I started resisting,  in 2010 I walked from Connecticut to Washington DC.  Along the way I lost 50 pounds :-),  and met other resisters.  At Busboys and Poets, (cafe in D.C.) Bess Alwerger, Vivian Vasquez, Sabrina Stevens and I started to dream about a movement, and maybe even a return to DC another year.  Bess CELT brought CELT, and CELT brought the National Council of English Teachers, Sabrina, brought Anthony Cody and the members of Teacher Letters to Obama, Facebook brought Rita Solnet, and her army of friends. Rita brought Diane Ravitch, and before we knew it we became a movement "Save Our Schools March & Week of Action". The SOS movement brought the American Federation of teachers, the Nation Education Association, and too many others to list here.  A movement Howard Zinn would be proud of, a movement joined the Freedom Riders.

In 2011 I am again walking those miles to prepare for the Save Our School March this July 30.

Sometimes a person starts to walk away saying good luck saying but, I don't think anyone can change things. I say wait it's been a long road, and yes even before NCLB became the law of the land, I spoke against its focus on standardized assessment.  At each and every opportunity I explained to Connecticut policymakers that the research indicates a heavy emphasis on such testing can only increase behavioral problems, and of course the drop out rate!

Finally, I give the them my last line of hope "The origins of every tidal wave can be found in a single drop of rain" join us become a raindrop of change. Most leave saying I hope you are right walking man. I hope you are right. On rare occasions, when I go into that rain drop rant, the last person listening might say "let's fight this thing together".

It's close to July 4th, 2011 ~ I'm still persisting, and I am again walking, but this I am walking with a few other raindrops.

My name is Jesse Turner I am one of those ordinary people Howard Zinn talked about.
200 miles down, 300 to go...
Jesse
For my readers who like to know what music inspired me today:
The song of day on my walk this morning was one of my Momma's favorites" A Change Is Gonna Come". I love the Leela James version. I could almost hear Momma singing along with Leela. I could hear her saying keep waking little Jess.
http://www.youtube.com/watch?v=FKf5F3EN0uk
Posted by Jesse Turner at 9:38 AM