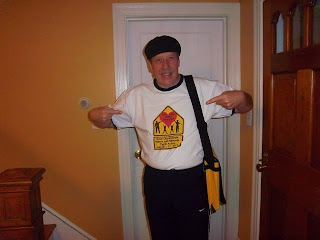 Michael Petrilli, ( http://educationnext.org/the-ends-of-education-reform/) tried using some fancy footwork around the criticism of NCLB's 100% Proficiency goal in his article in Education Next, "The Ends of Education Reform" I used his piece to motivate me to walk another 10 miles today, that now places me 40 miles closer to my 500 miles by July 30, 2011.
The premise of his article is that a 100% proficiency goal is the only goal possible if you care about children.
My response to his article is:


Michael, said reformers should clarify the ends that education reform can achieve. “If not 100 percent proficiency, then what? “
This very nature of the 100 proficiency model sums up the moral dilemma and failure of NCLB. The focus is on data not children. It sells public schools as factories that operate proficiency. It disregards a 100 years of legal battles for equity in our public schools. It promises choice, but while delivering lotteries. Any claim choice schools and proficiency testing eliminates poverty and cures special needs is merely the new smoke screen for a return to Plessy vs. Ferguson’s separate but equal.
The struggle for civil rights for children of color and special needs children is America's moral battle that will not be won with proficiency model reforms, but with truly desegregated public schools.  Fifty-seven years after the Brown decision, blacks and Latinos in American schools are more segregated than they have been in more than four decades. NCLB reforms have ignored the issue of desegregation just like they do with poverty.  This is why Michael I am marching to DC this July 30.
Thank you Michael for reminding the road ahead is tough, full of pitfalls, and snake oil sales men with cures for everything. All we need do is bow down to the NCLB/RTTT reformers. Well Michael I am walking, writing, speaking, and fighting your 100 % proficiency model reformers every step of the way. I have walked 40,000 steps closer to DC since yesterday. 460 miles to go, and that Save Our School March & Week of Action train keeps rolling along.
Children are more than test scores,
Jesse
click the link if you want to view a little of my walk today: