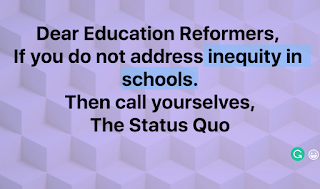 In the spirit of one of my greatest heroes, William Edward Burghardt Du Bois who pen public letters to President Wilson. I pick up that public letter writing here.

Dear Mr. President, during this booming economy. While giving billionaires more tax breaks, and in between all this talk about your hotels being the most beautiful in the world. Perhaps you might want to pay attention to what is happening in our public schools?
You might consider calling Secretary of Education Betsy DeVos over to the White House to give you a report on the status of public education in America.
Something Secretary DeVos may not have mentioned to you. A majority of states are spending less on their public schools than before the 2007 recession. 29 States spend less on schools than before the 2007/8 recession. Perhaps you can ask Secretary DeVos to travel to those 29 states and explain to them that spending less on our public schools is an economic catastrophe in the making.
May I make a suggestion, take back those tax breaks, and use those tax revenues to help our struggling schools.
Recently I met a man on the train from Philadelphia to Hartford CT. He asked me what I did for a living. I explained I was an educator. Somehow the conversation came around to a lack of investment in our public schools. I mention that 29 states are spending less these days. I quoted Horace Mann: "Money for schools now, or for prisons later". It turned out he worked for a firm that runs private prisons. He looked me in the eye. Then he said let me say this: "Profits are profits, and prisons are money makers, and schools are money losers...Trust me, sir, there are some on Wall Street and in government who are cheering on more prisons." His words were blunt, but they were also honest. Our conversation ended when he got off at the New York City stop. Of course, his words were eye-opening to say the least.
You might also suggest Secretary DeVos visit Chicago where the teachers are on strike not over wages, but for Chicago's children. She might begin a conversation there with students, teachers, and parents. Since she has never worked in a public school and lacks any real experience working with public school teachers, students, and parents my thinking is Chicago would make a perfect place to begin her studies.

Often I find myself wondering what would In the spirit of W.E.B Du Bois would be writing if he were here with us today. Then, I realize his words, his works, and his spirit walks with me, and millions of others every day.  I too am a man of letters to presidents, I have written to President Carter, President Clinton, President Bush, President Obama, and you. It's not political, it's moral, it's not Blue vs Red. It's not personal, it's what is just and fair for all.  I owe it to that other letter writer, and to that not yet kept pledge line "With Liberty and Justice for all." I have no doubt that someday that unkept pledge shall become real, and I will have no need to write letters to my presidents.
May I make one more suggestion? Perhaps your cabinet and Secretary DeVos might consider reading and studying Michelle Alexander's book "The New Jim Crow and the school-to-prison pipeline." 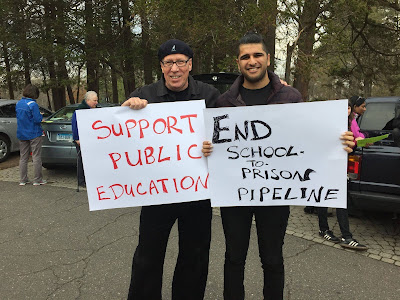 If you are interested in listening to the song that inspired my morning walk today it's Buffalo Springfield's " For What It's Worth" https://www.youtube.com/watch?v=gp5JCrSXkJY